Student protest for Ukraine in The Hague

On Friday, students from Groningen were protesting in front of the Ukraine embassy in The Hague. The initiators of the event, Francesca Cadoni and Maurits Foorthuis, were invited for coffee with the ambassador afterwards. What he had to say surprised them.
By Leonie Fransen

It’s 8 o’clock in the morning and the first students are gathering in the canteen of the Harmonie building. In co-operation with Francesca and Maurits, the International Relations and International Organizations student association, Clio, provided breakfast and a lecture from Professor Nienke de Deugd to initiate the day. ‘It means so much that you’re showing support’, De Deugd says to the small crowd.

As the professor is explaining the situation in Ukraine, only seven students are present, even though they are listening attentively. Forty people clicked ‘Going’ on the Facebook event, so where is everybody?

The few protesters who show up travel together by train to The Hague. In front of the Ukraine embassy, they meet up with students from other cities.

Francesca is giving out homemade blue and yellow ribbons – the colours of the Ukraine flag protestors – but a few hundred meters away at the Russian consulate, another demonstration is drawing much more attention. Among others, the PVDA and GroenLinks political parties are doing a Valentine’s kiss-in to protest the controversial Russian anti-gay propaganda law. 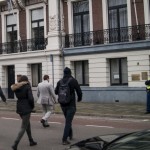 Francesca and Maurits walk into the Ukrainian embassy. 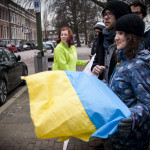 Olga from Ukraine explains the situation. 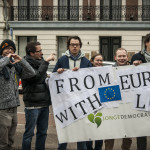 Students protest in front of the embassy. 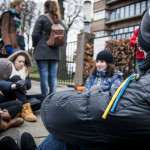 Next to the rainbow flags and the pink heart balloons, the Groninger protesters look a bit modest: they came equipped with one banner and a Ukrainian flag. They decide to go for a silent demonstration, just sitting there quietly and hoping for some attention from the embassy. One student breaks the silence and remarks: ‘In Ukraine you can’t even sit like this and protest.’

Olga, a 22-year-old Arts, Culture and Media student, begs to differ. ‘Yes, you can. I’m from Ukraine’, she says, going on to tell more about her motherland and the situation there.

Then, the police arrive. They tell the protesters that they have until 14:00 o’clock to demonstrate. Olga is surprised: ‘There is a limit of time to demonstrate? And you know when you will be arrested?!’

Everyone is already half frozen by the cold. At the end of the day, with only 2 minutes left to protest, a few students start singing ‘Imagine’ by John Lennon.

At 14:00 o’clock sharp, two men come outside and bring Francesca and Maurits inside the embassy. When they come back half an hour later, they pretend to have been beaten up but they are smiling ear-to-ear. ‘We went to have a cup of coffee with the Ukrainian ambassador. We expected him to be mad at us, but he was so happy!’ Maurits says proudly.

The ambassador is against Russia

Ambassador Olexander Horin told them he was just like them: pro-Europe and anti-Russia. He also said he wouldn’t shake hands with most members of the Ukraine government. As for Victor Yanukovych, he’s just demonized by the media, according to Horin. He’s not as bad as everybody thinks.

Francesca thinks the ambassador is a little too quick to defend Yanukovych: ‘He said that the violent actions of the police special forces were the acts of isolated criminals, not of the whole police division. He said Yanukovich didn’t order anybody to hurt the protesters which, honestly, I find very unlikely.’

Politics is about corruption

Francesca was also surprised to hear Horin say that, throughout his political career, he’s always tried to involve Dutch politicians in building trust among the Ukrainian parties. Ukraine’s parliamentarians need to be more willing to work together for the sake of the country, according to Horin.

‘What was also very interesting is that he said that political parties give students study loans in return for them waving the party flags or handing out fliers,’ Francesca reported. ‘This means that Ukrainian students get to understand pretty quickly that politics are about corruption, not ideals.’

The mystery of lightning