Student views on branching out

With Groningen pursuing a sister university in the northern Chinese city of Yantai, what do students who have connections to the Netherlands and China think about the plans?
By Traci White

Foreigners drink for free in Shanghai – that’s been Daniel Bogdanski’s extracurricular experience in China so far. ‘Partying in general is quite interesting as westerners are commonly invited for free entry and mostly free drinks in even the top clubs. A couple of weeks ago we went to Shanghai, and partied the whole night for free in one of the world’s top 100 clubs.’

Daniel is a RUG student spending a semester abroad at Xi’an Jiaotong-Liverpool University in the city of Suzhou, 85 kilometres west of Shanghai. In China, all of the elite Sino-foreign institutions are in or around the massive city of Shanghai. Yantai, the city where the RUG is planning to open a sister university, is 900 miles away – whether that is a strength or a vulnerability remains to be seen.

Daniel arrived in February and is following courses about Chinese economics, marketing strategy, Chinese business and employment law and Mandarin at the British-Chinese school. Aside from the VIP treatment that laowei (‘foreigners’ in Mandarin) like him get at the clubs, Daniel says that student life is pretty similar. There are student sports teams, and scoring a cheap pizza is as common an activity for students in Suzhou as it is in Groningen.

Not a culture shock

It hasn’t been much of a culture shock for Daniel to study in a new academic environment, he says. But the standards can still differ. ‘My Chinese Law teacher approached us today and ‘warned’ us that it happens that their students just study everything by heart. I mean, that’s what most people do for law, but there is a difference between the approaches and valuing critical thinking.’

‘There is a difference between the approaches and valuing critical thinking.’


Although academic standards are evolving in China, RUG student Di Liu acknowledges that ethical differences from the Netherlands remain. Di is from the city of Zibo in Shandong province – where Yantai is located – and has just completed her master’s degree in international financial management in Groningen.

She explains why writing down a text word-for-word without citing the source isn’t strictly considered plagiarism in China. ‘In the Netherlands, for the exams, there are so many open questions, and you can write anything you want as long as it’s relevant. But in China, a teacher may just say you are wrong because there are specific correct answers that have to be written with the exact same grammar and wording.’

‘Most competitive in China’

When Di graduated from high school in Shandong, she actually applied to the branch campus of the University of Nottingham Ningbo China. But due to a quota system in China, she says that she wasn’t accepted. ‘Every university in each part of China has a certain number of students they can admit. In their locality, they can attract 1,000 or more students, but from Shandong, only 10 students could go.’ 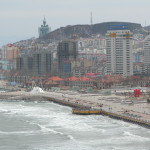 A view of the Bohai sea coast in the city of Yantai, the location of Groningen’s proposed international branch campus.

She says that Shandong is the most competitive province in China due to its massive population of 97 million people. ‘Even the college entrance exam is the most difficult’, Di adds. On top of that, the best universities in China often have their own admissions tests.

If a branch had existed in her home province, Di says she would definitely have tried to attend. ‘It’s the first time that any foreign university is coming to Shandong. It’s also a very different education system, so it can bring some new innovation to Chinese universities. I think that’s a good thing.’

One serious change for Di and other Chinese students who come to the RUG is housing. Unlike Groningen, international students in China often receive better treatment – and better housing – than the locals.

Zeng Ni, a PhD student at UMCG, is from Yantai and recalls what her living situation was like at Jilin University, the largest university in China: ‘Some dorms have 6, 8 or 12 girls all living in the same room. But international students typically have better facilities: they have single or double rooms, and equipment like showers is usually better.’ She hopes that all students will live together in more Chinese-style dorms at the Yantai campus.

‘Shandong province has a huge population that is craving education.’


Because of the challenges for Shandong students to gain admission to top universities in China or pay the fees to study abroad, Zeng is convinced that Yantai is a prime location for a branch campus. ‘Shandong province has a huge population that is craving education’, she says.

Di is optimistic too, but she has some questions. ‘I’m curious about whether their diploma will be totally the same as what we study here. I think it’s a very big challenge for Chinese students who have to study English, too. For listening and speaking English, we still have to practice, so I think it will be very tough for the Chinese students to do that for the first year.’

The to-be-determined tuition fees are also a serious matter for Chinese students. If they will receive a subsidy to study in Yantai, then the school will likely attract highly qualified students whose families may not be able to afford sending their child abroad. But if they aren’t subsidised, Zeng says that could result in a student body composed of those who can pay to get in rather than those with the best scores. ‘It’s either going to attract the best students or the richest students‘, she says.

During a visit by the delegation from China last week, UMCG was on the agenda. RUG spokesperson Gernant Deekens says the hospital visit was only to show their guests an important part of the city – there is no academic hospital on the campus in Yantai, so the medical faculty is unlikely to be one of the first to be taught there. But Zeng says that offering medical courses in Yantai would be feasible. ‘If they do want to set up an academic hospital, there is a hospital in every district in the city. The very best hospital in the whole province is in the city, too.’
‘They could just borrow their name, but the campus could become nothing like what it is here.’

But that raises another question: what sorts of differences exist between the ethical standards of research in China and the Netherlands? In Zeng’s experience, it has been a considerable contrast working here: ‘At UMCG, we have to wait months for approval by the ethical committee for working with animals. But at my university back home, we didn’t have to wait so long.’ China has national standards for conducting experiments with lab animals, but the extent to which CAU’s standards may differ from those of UMCG or the RUG is an important question.

Academic, personal and ethical differences still have to be accounted for in the plans. But many negotiations come down to two fundamental things: money and power. ‘If there is no funding from the RUG, then there will likely be much more autonomy locally’, Zeng says. ‘They could just borrow their name, but the campus could become nothing like what it is here.’