Suresh Vatakuti got two livers in one day

The organ was not suitable for transplant, but Suresh Vatakuti is overjoyed: now he can have it! For research, of course.
By Traci White 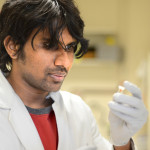 Today is a good day for Suresh Vatakuti – he got two livers. On Saturday night, he received a WhatsApp that would be odd to anyone but a researcher: an adult human liver would be available at UMCG at 11 PM.

It was intended to become a donor organ but was not suitable for transplant.
Vatakuti is testing tiny liver slices in the lab on Sunday afternoon, but why? To better predict toxicity in the organ, but also to reduce the usage of lab rats.

A whole liver can only be preserved for 24 hours if it’s kept cold in a solution, so Vatakuti has been working with it since 6 o’clock on Sunday morning. It’s gloriously sunny afternoon outside, but Vatakuti, a 25-year-old pharmacy PhD student from India, is walking the darkened halls of the massive Antonius Deusinglaan building on the UMCG campus.

The only noises are ‘90s pop songs on a staticky radio and the washing machine-like revolutions of an incubator, where Vatakuti’s samples are being exposed to various chemical compounds. ‘I’m one of the members working on the human liver who works on the weekends’, he explains, spooning paper-thin slices of liver into plastic tubes before dropping them into a blue flask, wisps of liquid nitrogen pouring over the lip.

Several of his colleagues were there on Sunday morning to help with the slicing, but as the afternoon wears on, he puts the liver fragments in the fridge for team mates to examine on Monday morning.

Vatakuti is a member of a team of five PhDs working under Dr. Geny Groothuis, who has been striving for decades to reduce medical science’s dependency on animal testing. Groothuis’s lab developed a way to create extremely thin but still viable slices of human organ tissue for testing in 1993.

Prior to developing this thin-slicing method, researchers had little choice but to subject lab rats to medications and then examine their organs. Groothuis’s method means fewer animals have to suffer for science. Using human organ samples also means tests more accurately show how medication affects humans.

‘Rats metabolize drugs differently than humans, so compounds that show promise in animal test subjects can still fail when given to humans’,  Vatakuti explains. 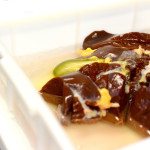 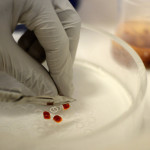 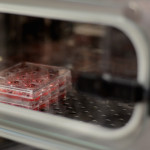 In the incubator // Photo Traci White

Testing the liver’s response to medication is crucial – the massive organ is a filter for the body, in particular for orally-ingested pills. Vatakuti is researching whether drugs exert toxicity by cholestasis (meaning little or no bile is being secreted) or by necrosis (death of cells in an organ).

For his research, Vatakuti extracts core samples from a healthy human organ and uses what resembles a miniature meat slicer to create smaller, testable slices only 250 micrometers thick and 5 mm in diameter. From the current liver, Vatakuti and his team are able to create 300 slices for testing dozens of medical compounds.

It’s been a bit like winning the lottery lately: ‘We’ve gone six months at a time without getting a new liver,’ Vatakuti says, so getting two adult livers within 24 hours is great news for the research team. The second one arrives at 7 o’ clock on Sunday night. Vatakuti heads home after cleaning up the lab on Sunday afternoon, but he and his team will be back at it on Monday, running their tests.

Sugar-coating for the boss