The Bachelor’s programme you applied for was supposed to be all in English. However, after you moved to Groningen, you found yourself surrounded by Dutch students speaking… Dutch. That’s a problem.
By Saminna van den Bulk

The Faculty of Mathematics and Natural Sciences introduced English-taught degree programmes last year, but some students still have to get used to the fact that they’re supposed to be speaking English. ‘Ninety-five percent of the students are Dutch, so we mostly speak Dutch’, says Wouter Sipma. 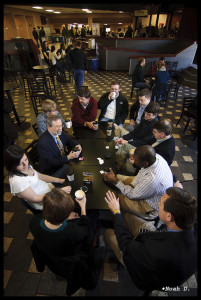 He’s one of the students who transferred from a Dutch-taught programme to an international one. However, he sees that English isn’t spoken the whole time. ‘All the lectures are in English, but during the lunch break, for example, we talk mainly in Dutch. Also, we only ask questions in English if the lecturer’s Dutch is poor or he or she doesn’t speak it at all’, he says.

Faculty Dean Jasper Knoester admits there’s a problem. ‘International students have problems integrating. In a survey, some of them complained that most Dutch students continually speak their mother tongue, which makes it hard for international students to take part in discussions.’

However, the Faculty of Physics isn’t the only one battling with this problem, says Knoester. All over the University it seems to be hard to stop Dutch students speaking Dutch when there are a lot of them around. ‘You see it with PhD students too. When the majority are Dutch, people just switch to Dutch.’

That doesn’t mean that Dutch students are ignoring their international colleagues: ‘It’s natural to switch to your mother tongue. Maybe they feel embarrassed about their English. Being taught your future career in a foreign language doesn’t mean you can make small talk in it.

Xavi Bonet recognizes the problem. His lecturers respect the fact that he speaks English, but he says socializing during coffee breaks can be quite hard. ‘Sometimes they ask interesting questions, but I’m not able to completely understand them in Dutch.’

No answering questions in Dutch

Xavi is not afraid to ask people to switch languages, but he adds: ‘Maybe not everyone can do it – and that’s a problem for international students.’

Knoester and his Faculty are working hard to find a solution, but he says ‘there’s no way of controlling it’. The only thing the Board can do – and have done – is to make lecturers aware that English is the only approved language in the lecture rooms. ‘No answering questions in Dutch anymore.’

As far as the lecturers are concerned, the matter is clear now, Professor of Informatics Michael Wilkinson thinks. However, there’s still a big difference between international and Dutch students: ‘International students are more cautious than Dutch students. In many countries it’s not common practice to walk over to a professor and ask a question. They’re not used to the hierarchy we have here and that makes it harder for them to indicate they have an issue.’

‘We’re nog quite there yet’

The recent language issues are teething problems, he thinks. ‘We made the switch to English, which went well, but we’re not quite there yet. The Faculty Board meetings, for instance, also need to be in English.’

Jaap Eising, from the study association FMF, agrees. ‘Students and lecturers are still going through a transitional phase’, he says. The association is already sending e-mails in English; the website, however, is still largely in Dutch. ‘We’re working on it’, Eising says. ‘Internationalizing takes time.’