British media has been proclaiming for years that the Netherlands in general and Groningen in particular have become attractive study destinations for English and Irish students. What has caught the prospective students’ eyes and made them turn toward Groningen?
By Nina Yakimova

Home to 197,823 citizens and several universities with more than 55,000 students combined, Groningen is rightfully called the student city of northern Netherlands. At the RUG alone, fifteen per cent of students are international, most of whom come from Germany, China, or the United Kingdom.

Over the past five years, the number of British or Irish students at the RUG has been growing steadily. In 2010, there were only 22 students enrolled here from Ireland and the United Kingdom. By contrast, in 2015, that total has increased more than tenfold to 281.

In light of this trend, it seems wise that the University of Groningen offers an Open Day specifically for all prospective British and Irish students. This year’s event took place on Friday, 30th October and was attended by 270 prospective students, many of whom were accompanied by family members. Due to the demand, a waiting list had to be implemented with 120 people on it. That guest list was an increase of 80 attendants more than the Open Day in 2014, according to international marketing manager Jemma Davies. 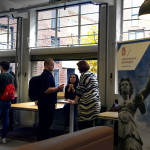 Students line up for information during the Open Day for British and Irish would-be RUG attendees.

Students-to-be and their parents buzzed around the University College Groningen building on Friday, the venue where the Open Day was held. In addition to the pots of freshly brewed coffee and tea, guests were provided with information about the various faculties of the RUG. Of particular interest to the visitors, details about financial support such as student grants and loans available to international students were also shared. A handful of British RUG students shared their experiences with the would-be new students, and the visitors were also led on a walking tour of the city.

But what is it exactly that makes Groningen so desirable to the British and Irish students? In their own words, there are a variety of reasons, but tuition fees are far and away the most important part of their decision. The standard tuition fees for most courses in the Netherlands as of 2015 are 1,951 euros – each year, the tuition fees increase in accordance with inflation.

By contrast, the universities in the United Kingdom can charge a maximum of 9,000 pounds – 12,600 euros – per year. Not coincidentally, a cap on the amount that British schools can charge was dropped in 2011, and tuition fees have been creeping up ever since, as have the numbers of British and Irish students heading abroad for college.

The situation is similar with students coming from Scotland, where the tuition fees for undergraduate courses are free but the duration of the bachelor programs is four years instead of three. According to prospective students and parents from Scotland who attended the Open Day, tuition fees in Groningen combined with living expenses for the duration of a Dutch undergraduate program is much more affordable than the four year programmes offered by Scottish universities.

British students who are already enrolled at the RUG say that finding the right courses and the quality of education also matter a lot. The high position in the rankings of the University of Groningen was what tipped the scales when choosing a university for Mayowa Oduola, a British student at the RUG in Economics and Business.‘It was important that the university was well recognised and at the same time wasn’t too expensive.’

‘The university was well recognised and at the same time wasn’t too expensive’
The fact that more than 100 university programmes are taught in English, including master and PhD programmes, also offers freedom of choice and the possibility to ‘pick the courses that really fit with your interests’, says Layla Mahmood, a British alumni of the RUG from the American Studies programme. Many graduates from the United Kingdom choose to continue their education in the Netherlands, too – Layla is currently studying in a master’s programme at the University of Amsterdam.

Groningen’s strong student community and the extent to which the city seems tailor made for students also offers a different experience and a sense of independence, says Beth Lyon, a Scottish prospective student who was attending the Open Day. But the fact that her sibling was already studying here also piqued her interest: ‘My brother was really impressed with Groningen as well as the university’, adds Beth.

Another major contrast with studying in England, Scotland, Wales, or Ireland is that the first year in Groningen is more study focused, whereas in Scotland the first year could be a bit on the partying side, says Beth’s mother, Rhona Lyon. It’s true that the RUG requires all first year students to pass at least 75 per cent of the courses in that year in order to continue with their programme, but it’s also true that Groningen’s reputation as a partying city isn’t undeserved.

The opportunity to pick up a new language is also a plus, even though the international atmosphere in Groningen makes it possible for students to get a part-time job without having to speak Dutch. The University of Groningen offers free Dutch courses to international degree students, which the presenters at the Open Day emphasized can in turn increase the chances for graduates to find work in the Netherlands. The possibility to enter the work force in the Netherlands in the foreseeable future is a motivation to study in Groningen, says Beth.

Aside from tuition fees, opportunities to learn a new language, offering high-quality courses and family connections, for many students, the location of the Netherlands is also a perk unto itself: far enough away from the United Kingdom to have the feeling of being somewhere else, yet simultaneously close enough to go home again as much – or as little – as you like.