Sebastiaan Vonk, a master’s student of American studies at the RUG, is the director of The Faces of Margraten, a project to put faces to the names of thousands of American World War II soldiers buried in the Netherlands.
By Valia Papadopoulou

‘I adopted my first grave at the age of thirteen’, Sebastiaan Vonk recalls. ‘I feel like I have a really strong connection with that soldier, Corporal Lawrence F. Shea. He was only 21 years old when he died, almost the same age as I am. Sometimes, I think: what if I had to take part in the war? What if I had to fight? It is unimaginable.’ 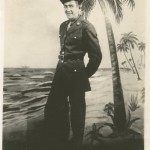 Cpl. Lawrence F. Shea, the first soldiers whose grave was the first that Sebastiaan Vonk adopted when he was 13. Shea was 21 when he died during World War II.

Vonk, a 22-year-old RUG master’s student of American studies, is one of the thousands of Dutch citizens who adopted and took care of a grave of the American War Cemetery and Memorial Netherlands, which lies in Margraten, a village in the south of the Netherlands. In that cemetery, 10,023 American soldiers who died in World War II are buried.

But Vonk’s association with Margraten goes even further. He directed the project The Faces of Margraten, which aims to tell the stories of those soldiers. ‘It is a project that started in 2014 out of my personal interest. Our mission is to give a face to every name. People submit photos of their loved ones through our website and we do research into who they actually were and what they did before the war’, Vonk explains.

The Faces of Margraten held a four-day memorial service last month to honour these fallen heroes once more, since the Netherlands celebrates the 70th anniversary of its liberation this year. During this tribute, all of the submitted photos were placed on display next to the graves and, for the first time, people could see the faces of their soldiers. The project was launched by the Dutch non-profit organization Stichting Verenigde Adoptanten Amerikaanse Oorlogsgraven (Foundation United Adopters American War Graves). Vonk is the chairperson of the foundation.

‘So far, we have matched only one-third of the graves, so there are still a lot missing. We know that we might not find all the photos in the end, but we will try to collect as many as possible’, Vonk explains.

He explains that he and his team, which consists of 25 volunteers, were aware of how important World War II is in the history of the Netherlands, but they were unsure how modern Dutch society would react to their project.

When the gates to the cemetery opened on 2 May, it became clear that many people still cared. ‘We saw people approaching the cemetery, cars parking and more people coming. That amazed us. The number of people who came between the 2nd and the 5th of May equals ten per cent of a year’s visitors, and that was totally beyond our expectations’, says Vonk.

According to Foundation United Adopters American War Graves, 25,000 people visited the cemetery during those four days. 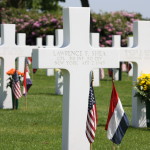 The white cross headstone of Cpl. Lawrence F. Shea in the graveyard at Margraten.

‘People were very grateful for this tribute. Most people came to the cemetery just because the project was there. Many of them were curious to know if there was a picture of their soldier’, Vonk says. But even when the tribute was over and the photos were removed, that level of interest remained. Vonk and his team were inundated afterwards with questions and requests to place the photos next to the graves permanently.

‘People wanted to know if we are going to repeat the project. They must know that they can still see the photos of their loved ones in our online database, Fields of Honor. For practical reasons, the photos can’t remain in the cemetery permanently. But we are also afraid that if we do so, they will lose their impact. It’s like a hit song: when you listen to it over and over again, you will get sick of it in the end.’

The project’s impact continues to grow. It has been a month since the tribute took place, and people are still submitting photos. Over the last month, Vonk has received more than 100 photos.

He confesses that the way people are responding is somewhat overwhelming. ‘Even now, weeks after the project is over, people come and talk to me. I have been on television many times and people recognise me. But it is funny sometimes, because they talk behind my back and they usually say: ‘Hey, that’s the boy, that’s the boy”, Vonk says.

Although the project has been his number one priority since the day he initiated it, he has never forgotten that he is also a master’s student.

‘For me personally, it was really hard to follow the project and my studies. Even when I said that for two or three hours, I won’t reply to any e-mails and study, in the end, I couldn’t. The project is my passion. But on the other hand, I was very privileged since I had not only moral but economic support as well from my parents from the very beginning. It would be hard for me to volunteer and work at the same time’, Vonk says. 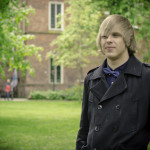 From now on, he will focus more on his studies but he says one thing is certain; he will repeat the project sometime in the future now that he has realised how important it was for a lot of people, including him.

‘I remember one man, he must have been in his 80s. He just came back from the graves with tears in his eyes, and he told me: ‘Finally, I managed to see that photo.’ It was the first time he had seen the soldier’s photo since 1945. Can you imagine? For me, this is testimony of the value many adopters attribute to seeing a photo of their soldier. For that reason, me and my team, we all share a great sense of pride that we have been able to complete this project.’

En route to the EU