These internationals truly love the RUG

Every year, motivated international graduates become International Alumni Ambassadors. Sadly, these eager Groningen-promotors don’t always have a lot to do.
By Traci White

An International Alumni Ambassador (IAA) is unpaid and works up to 35 hours in a one-year-long ambassadorship. It was founded by the Ubbo Emmius Fund in 2011, based on the idea that international graduates who have had a positive experience studying in Groningen will naturally speak highly of the RUG in their home countries. The programme makes them official representatives of the RUG – they leave the Netherlands equipped with a customizable Powerpoint presentation and business cards.

Since 2011 there have been 71 ambassadors from 37 countries.

‘I hate having an enthusiastic student and not having anything for them to do’, Jessica Winters, marketing coordinator for the RUG, says.

That enthusiastic student, in this case, is Edmond Yao Doumon, an International Alumni Ambassador for 2013 to 2014. If it was up to him, Doumon, 33, would be on every radio station, in every newspaper and hosting educational fairs in his home country of Ghana to tell everybody just how great Groningen is.

‘I’m supposed to be a kind of link to the university from this part of the world for anybody who is interested, but I think the level of publicity is very low’, Doumon says.

His grand plans to promote Groningen at fairs and by advertising in Ghana had a budget of around 3,000 Euros, according to Winters. ‘That is a budget that I simply don’t have. I wish I did – it would save us time to have an ambassador organize all of that’, she says.

‘Edmond is really, really motivated’, agrees International Alumni Officer, Isma Moualhi, ‘but his proposal exceeds the purpose of this programme.’ Moualhi is in charge of all the IAAs and helps them to develop plans to promote the RUG through educational fairs, fostering alumni contacts and facilitating business collaborations back home. 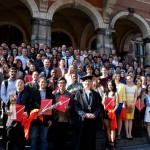 While the IAAs are eager to help, an issue for many of them is that their tasks of supporting marketing activities and maintaining alumni networks already fall to the marketing department and Nuffic.

An additional challenge is that the RUG compiles an annual priority list of nations to target, and the most motivated IAAs don’t always live in those countries. ‘The presumed target countries we selected ambassadors from [for 2014 to 2015] are Indonesia, Germany, China, Mexico, Romania, Russia, Turkey and the UK’, Moualhi says. Missing from that list, unfortunately for Doumon, is Ghana.

‘You can’t cover the whole world, so you have to pick and choose’, Winters says. The university has chosen to focus on Mexico, and Daphne Marino, an IAA there from 2012 to 2013, was actually able to help out at a booth for the RUG at an educational fair.

‘You can’t cover the whole world, so you have to pick and choose’
In doing so, she recognized that the ambassadors don’t really play into the university’s marketing scheme. ‘The RUG has its own representative for education marketing in Latin America – Joyce Fongers – and when I had the chance to work with her, I realized she is the person the university uses to recruit, not the ambassadors’, Marino says.

As the IAA programme is still finding its place in the university’s marketing landscape, at least one ambassador has successfully recruited new students to the RUG. Ana Bosnic, an IAA in Serbia from 2011 to 2012, gave a presentation about the RUG at her university in Novi Sad, and wound up helping several of her friends apply for a Research Master in Linguistics in Groningen – they were accepted, she reports proudly.

Winters is happy with success stories like Bosnic and wants to utilize the valuable human resource of the IAAs more effectively. Back at the RUG’s unofficial embassy in Ghana, Doumon fully agrees. ‘I think the university will need to earn their targets for internationals by putting their marketing together with the work of the ambassadors’, he says.

Everyone who becomes an IAA deeply believes that Groningen is special, and they want to encourage everyone to experience that for themselves. ‘It’s not just because I’m an ambassador, but I really do think it’s a good university that people should go to’, Doumon says. How to best get that message across is still a work in progress.