‘To my surprise, I am still in the running’

Biomedical sciences master’s student Just Dronkers made his debut on the national volleyball team last weekend. Next week, the volleyball association Lycurgus player will hear whether he is allowed to accompany the team to Turkey, Slovakia and South Korea this summer to participate in the World League. And his studies? That will be put on the backburner for a little while.
By Koen Marée / Photos by Traci White / Translation by Mina Solanki

It is 9 o’ clock on Tuesday morning. While many other students are still having a lie in, Just Dronkers has already begun his busy day. Due to his unexpected selection for the Dutch team, his final research project and graduation process will be delayed. ‘Luckily, the department of cellular biology is very flexible. The fact that they are allowing me to postpone it all is very nice of them. But there is quite a bit of bureaucracy involved.’

The 22-year-old volleyball player is chasing his dreams. Last weekend, he was one of the 14-man Dutch team who had been provisionally selected, and he travelled to Finland to play in several trial matches. They played three matches against the Finns, all of which they won. Dronkers, in the libero position, made an appearance twice. Now, making the definitive selection for the national team for the prestigious World League is beckoning.

‘Going abroad is my goal’


In 2012, Dronkers transferred from SSS in Barneveld to volleyball association Lycurgus. He was able to continue with his studies in biomedical sciences, which he started in Utrecht, at the RUG. ‘With Lycurgus, I was able to compete for prizes. I have chosen to finish my studies here before I leave. Going abroad is my goal. I could have already gone after finishing my bachelor’s degree, but I did not feel I was good enough yet.’

It turned out to be a good choice: this season, Dronkers won a treble (three prizes in a row, ed.) with Lycurgus. ‘We won the Super cup in October, and that gave the club an enormous boost. Winning the cup was pretty difficult; we had to come a long way to win it in the end. And the icing on the cake was the national championship, of course. In front of a crowd of around 3,000 to 4,000 people at the MartiniPlaza, we took the title in a match against Orion.’

In between these matches, Dronkers also went to Russia as a European-level volleyball player. ‘While we were there, we lost badly two times. We didn’t contribute much at all. Personally, the made it easier for me to join the Dutch team. You are already used to playing at a high level; you know what to expect at national team matches.’

Dronkers trained every Monday from November to February with the best 18 players from the premier league under the guidance of national coach Gido Vermeulen. ‘That is where I and a number of other players were really in the spotlight. On 2 May, I was allowed to play with the ‘real’ Dutch team. That is when I heard that I would be the fourth libero, even though only three were needed. Nevertheless, I ended up on the longlist with 27 other people. The team was repeatedly trimmed and to my surprise, I am still in the running.’

More trial matches await this weekend. This time, the provisional Dutch team will play three matches against Germany, after which Dronkers will hear whether he has made the final cut or not. ‘I might hear the news on my 23rd birthday, which is the 7th of June.’ He feels at home within the team: ‘It helps that I played for the Dutch Junior team when I was younger. I know what is involved when one plays an international match. But this time, it is an experienced group of players. It helps if you play well because then you are accepted more quickly. Within our team, it goes without saying that nobody is excluded.’ 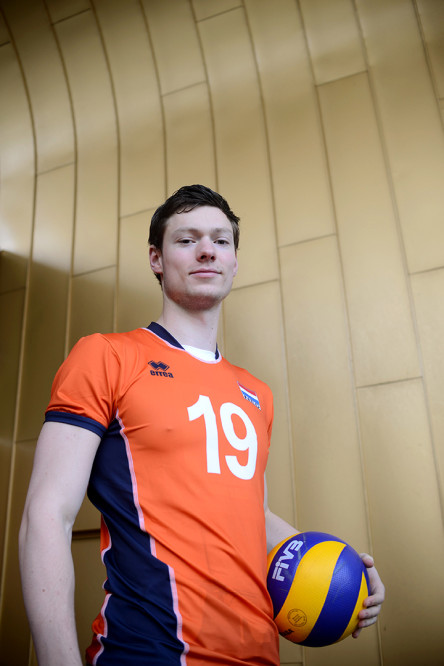 ‘I have already thought of things which I did in matches against Finland that I want to do differently when I play against Germany. This summer, I hope to be chosen to go along with the team. The European Championship qualifying rounds are directly after that. That means that I won’t be able to finish my master’s degree until October. After that, I want to focus completely on volleyball, and after my athletic career is done, I might do a PhD.’

In any case, this is Dronkers’ last year in Groningen: ‘I want the adventure of playing in the Champions League at a sold out MartiniPlaza, with a little luck. If you can stand out on the team, you can put yourself on the radar for foreign clubs. That is my goal. But firstly, I want to play another great season with Lycurgus, and that is no easy feat. I want to leave Groningen with three prizes and a master’s degree in the bag.’