Associate Professor of Ancient History Jan Willem Drijvers went to see 300: Rise of an Empire, which is about the second invasion of Greece. It’s blood and violence in 3D.
By Tim Bakker

Athenian general Themistocles kills the Persian king Darius at the Battle of Marathon in 490 BC. Darius’ son, Xerxes, wants revenge and so launches the second Persian invasion of Greece.

Those who saw the 2006 movie 300 might suspect what is coming in its sequel. ‘The movie showed extreme violence’, says Associate Professor of Ancient History Jan Willem Drijvers. 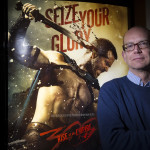 300: Rise of an Empire is a cinematic production of Frank Miller’s graphic novel Xerxes, who also wrote 300. Both were based on The Histories by Herodotus and follow most of its themes but not all. ‘A lot of the story was made up or exaggerated. Almost everything was way over the top. Themistocles never saw Darius, let alone killed him at the Battle of Marathon.’

It is all part of the Zack Snyder legacy. Producer of 300 and also of Watchmen and the more recent Man of Steel, he has a thing about dark and violent cinematography. ‘The Greeks are portrayed as blond, muscular, bare-chested guys, which is of course ridiculous, whereas the Persians are shown as clothed, darker guys with black hair and beards’, says Drijvers. ‘There is this hyperbole of West versus East, Good versus Evil. It’s all so black and white.’

Besides Themistocles, another main figure is power chick Artemisia, the leader of Xerxes’ fleet. ‘We don’t see women in Greek war stories very often, but Artemisia was actually described in great detail by Herodotus. She wasn’t nearly as powerful as she is portrayed, but she did command a small portion of the fleet, which in those days was a real achievement.’ Artemisia is vengeful, deadly and of course beautiful.

Themistocles isn’t too chubby either. Like the rest of his army, he is ridiculously strong, with rock-hard abs, a six pack and huge arms. That makes two attractive generals, so anything could happen, right?

As for the title, what’s that all about? Sure, the 300 part links it with the previous movie, but the other part? The working title The Battle of Artemisium – one of the battles fought in the movie – sounded too exotic, the producers felt.

‘The rise of an empire is all about Athens’, explains Drijvers. ‘After the victory at Salamis, Athens became leader of a military marine alliance. This led to Athens becoming the strongest and main city in the whole of Greece.’

Overall, 300: Rise of an Empire is way over the top, barely touching on actual history, and is a good advert for gym subscriptions. The 3D effects don’t really add anything, but they aren’t harmful. It’s good enough to watch with some friends, a strong stomach and a couple of beers, but only if you have nothing better to do.