A treasure trove of undelivered letters

To be precise, it’s a collection of 2,600 letters that are more than 300 years old. David van der Linden and an international research team with members from the University of Leiden, Yale, MIT and Oxford are investigating not only the contents but the way in which the letters have been folded. Envelopes did not exist back then.
By Tim Bakker / Translation by Mina Solanki

It has been sitting in the Museum for Communication in The Hague since 1926: a big black chest full of letters. The letters were sent between 1689 and 1706, but were never delivered for a variety of reasons. There has never been large scale research carried out on the letters and 600 of them had never even been opened. That is what’s so interesting at this moment, David van der Linden feels. He ‘rediscovered’ the chest in 2012, after which the organizations of the NWO, MIT Libraries and Metamorfoze, the national programme for the preservation of paper heritage, ensured that the research could begin last year. 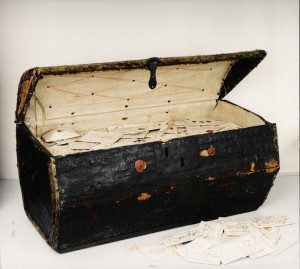 The chest was the property of postmaster Simon de Brienne, who was responsible for the cross-border mail to and from France. If a letter was not accepted (the addressee also had to pay postal charges), the address was unknown or the addressee had passed away or moved, De Brienne put it in the chest. By doing this, the letter could still possibly be delivered to the correct person. Was he a postmaster with a heart for the job? ‘Well, it was more out of economic consideration’, says Van der Linden, laughing. ‘That way, he could still possibly receive some of the money later. He also called the chest a piggy bank.’

The letters are a unique peek into the past. However, Van der Linden is not only interested in the content of the letters. ‘The shape and material are just as important. They are also a part of history. One cannot be without the other, and that often receives little attention.’ The letters were folded and sealed in such a way that no one was able to open a letter without damaging it. This type of ‘security’ resulted in the most ingenious techniques to ensure the safety of the letter’s contents.

We can now send emails and text messages to the other side of the world in the blink of an eye, but in the old days it was different. ‘It would take around four days to send a letter from Paris to Amsterdam’, says Van der Linden. ‘Nowadays, it takes just as long, so you can imagine how efficient it was back then! If you want to convey confidential information, security is of utmost importance. An email can easily be intercepted. If you ever want to be a spy, you are best off sending your information via the post.’

‘The problem with archiving the old letters is that they often get opened, neatly smoothed out and tucked away. By doing this, you lose the folding method and that is a shame. Letter locking, as it is called, is a new research area. This field came into existence not only with the focus on the security of a letter. The way in which a letter was folded was very personal, and acted almost as a signature’, he explains. ‘So it also tells us things about the sender and the time and place.’

But how do you investigate the content and the folding mechanism of a letter without opening it? ‘With x-ray tomography: a kind of super scanner, which was also used to research the Dead Sea scrolls. In this case it is slightly more difficult as the text, in contrast to the Dead Sea scrolls, is not in neat lines, but angles at each fold. The whole process is therefore very complicated and also very costly. We have begun the research, but a lot of time and money is needed to finish it’, reports the researcher.

The 2,000 letters that have already been opened are valuable, of course. ‘They give a nice cross-section of society’, says Van der Linden. ‘There are also letters from ordinary citizens, and thus also women. You do not come across such letters as often as the others, which is therefore interesting.’ He has only read a few, he admits. ‘You really feel like a voyeur. Many of the letters are from broken up Huguenot families who had to flee due to their beliefs and miss each other very much. There are also rejected love letters and an order list from a bookseller. I knew the titles, coincidently: they were pornography books’, he laughs.

The progress of the investigation and research team are presented on a website. ‘The intention is to ultimately put all of the letters on the website, once these have been scanned and deciphered’, says the historian.