‘We want to have a party straight away’

If your PhD research is not going as hoped, it is nice to be able to talk about it at home. But the chance that your partner understands what you are talking about is generally pretty small. This was not a problem for PhD candidates Petra Popken and Ruud Detert Oude Weme. The married couple, both with a background in biochemistry, will receive their PhDs together on 11 December.
By Renée Moezelaar / Translation by Mina Solanki

When Popken and Detert Oude Weme finished their PhD research at the same time in July this year, they decided that they could just as well have their ceremonies on the same day. ‘That was a considerable challenge’, says Popken. ‘We take up two time slots and all the professors involved have to be available. Straight away, the whole month of November wasn’t an option.’ Thankfully, a date was available in December and happened to be on a Friday. ‘We really wanted it to be on a Friday so that we could have a party straight after’, says Detert Oude Weme, laughing.

The gateway to the nucleus

Popken receives her PhD on Friday for her research on the nucleus pore complex in yeast cells. The complex is in the membrane of the nucleus and determines what is allowed in the nucleus and what is not. ‘We wanted to know how the complex makes its selection’, says Popken. ‘I looked at whether the size of the proteins mattered in the selection process.’ 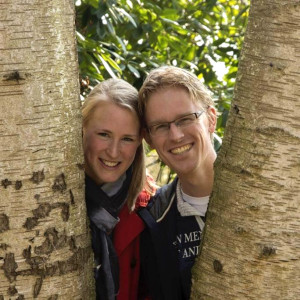 That turned out to be the case: the bigger the protein, the smaller the amount that could go through the complex. Popken discovered that the larger proteins even leaked into the nucleus a little, contrary to popular belief up until now: ‘If you wait long enough, you can find proteins in the nucleus.’

Popken cannot think of a direct societal application for her research at this moment. ‘The research is very fundamental. In the end, this process could have an effect on the ageing of cells, but that has to be researched further.’ The cell biologist had already begun research on the ageing process, but had to let a colleague take over due to lack of time.

The lack of time was the result of an especially difficult start. ‘The first two years were not so successful’, Popken says with a sigh. ‘I spent too much time on projects which yielded few results, as the methods did not work well yet.’ Thankfully, results were obtained in the end, and the PhD book could be written.

Detert Oude Weme has also had his fair share of setbacks. He researched the interaction of proteins in bacteria. ‘We do not know whether bacteria are organized on the inside or whether everything just floats about like in soup’, says Detert Oude Weme. ‘I wanted to establish this better by following proteins.’

The research began energetically, and the microbiologist developed a method to measure the interaction between proteins. ‘We attached different fluorescent markers to different proteins, so-called FRET-pairs’, he explains. The idea was that these markers would tell him what kinds of interactions the proteins had, as they react to each other when they are in close proximity.

In the tests, the method seemed to work, but it unfortunately did not work with living bacteria. ‘I only saw some noise on the image and then the signal failed’, says Detert Oude Weme. ‘The method was not refined enough.’ At the end of the four years, a new and improved measuring method emerged. ‘The new method was one I had tried in my first year, but it had not worked then. Someone had improved it in the last three years, but that was unfortunately too late for me.’

Although his research had produced information about the fluorescent proteins, it was not what the microbiologist had expected. ‘I am not really satisfied with my output.’ Nevertheless, both doctoral candidates are happy that they decided to do a PhD. ‘It is nice if you can publish something or your experiment works’, says Detert Oude Weme.

Despite all the frustrations, they also spend their free time working with biological processes. ‘We keep ourselves busy with brewing beer as our hobby’, says Detert Oude Weme. Popken laughs: ‘I think that is the best way to bring my work home. In the lab, I work with yeast, and yeast is also involved in brewing beer.’