‘We want to send out a signal’

Since Monday, the climate conference in Paris has been in full swing. The goal is far-reaching agreements to stop climate change. For the conference’s last two days, 11 and 12 December, a delegation of Dwars, a GroenLinks youth branch, will travel to the French capital. ‘We’ll either have a party or we’ll need to kick it up a notch!
By Koen Marée / Translation by Sarah van Steenderen

As 64 professors said in an open letter to the House of Representatives, we need to do everything we can to save the environment. During the twelve days of the climate conference in Paris, each country is expected to present plans to counteract climate change and its consequences. Tessa Gillett and Sake Prins are two of the approximately fifteen Dwars members from Groningen who will be travelling to Paris.

‘It’s mainly about the 2-Degree Model’, says Gillett. The Molecular Life Sciences students has read up on the subject. ‘If the earth warms up more than those two degrees, we will be at great risk. We won’t be able to control the climate ourselves anymore.’ Prins, a student of Bioinformatics, takes it a step further: ‘Actually, more than one and a half degrees would already be unacceptable.’

It sounds like a minuscule difference. Surely a slight increase in temperature would be welcomed in our chilly country? ‘It doesn’t have as much of an impact on us, that is true’, says Gillett. ‘But on the other side of the world, islands are disappearing under water. And we as a western rich society are responsible for that.’ Prins adds: ‘Right now, we say we can’t even handle two million refugees, but a report from the UN says that in this century alone, climate change will drive approximately 200 million from their homes.’


Besides, we’re talking about an average of one and a half degrees’, Prins continues. ‘The North Pole might even warm up by six degrees. That’s not just bad for the bears, but the sea levels will rise as well. I don’t know if Groningen will be safe then. The gas extraction is also causing the ground to settle, which only increases the difference with the sea level.’

A year ago, the countries failed to reach an agreement during the climate conference in Copenhagen. ‘The question now is, how should it take shape?’ Gillett says. ‘Are we going to be able to use sanctions to make countries stick to the agreements? The current plans combined do not lead to a number below that 2-Degree Model.’

Environmental defence (Milieudefensie) has organised a trip that will bring the pair to Paris on December 11. The set up of the demonstrations has been changed slightly due to the recent attacks. ‘A lot of people thought the trip would be cancelled. The demonstration has been moved indoors, and there will undoubtedly be strict controls. We will be listening to eyewitnesses of climate change, as well as other speakers. And there will be music.’

The plan is to go into the city in small groups outfitted with GPS on 12 December. A large public gathering is prohibited because of the state of emergency. ‘All the groups should head towards a certain point in the city where, if everything goes according to plan, the GPS signals will enable them to read a message on the internet. It’s an original idea, but I’m not sure if other people will pick up on it. The media perhaps, but it’s not as interesting as a crowd with funny signs.’

‘They will reach a decision no matter what’, Gillett dares to posit. ‘It just remains to be seen how concrete and effective that decision will be.’ Prins: ‘Mankind can no longer afford not to treat the climate better. The most difficult part is creating awareness. And it’s not just about the climate, it’s also about inequality. Poor countries want to grow and industrialise as well. And now that we rich western countries have experienced that stage of development, we want to forbid them from doing the same.’

‘We want more political willingness and awareness’, Gillett argues. ‘But that won’t happen if the people won’t change their lifestyle. It’s important to us that we send out a signal in Paris. And of course it’s really cool to be here as part of an international group. It’s going to be a great experience.’ 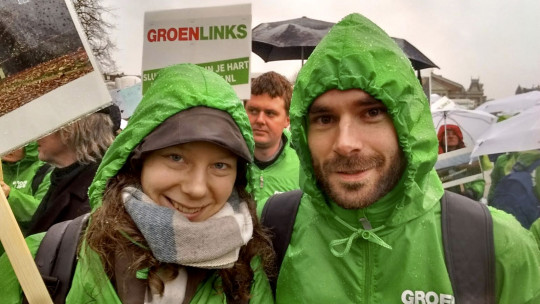 Sake (right) attended a demonstration in Amsterdam last week, calling for attention to be paid to climate change.