What should we do?

Science Faction member Nicolai Petkov makes the case for change at the RUG. 'The crucial question now is, 'What should we do next?’'
By Nikolai Petkov

‘Что делать?’ (English: What should we do?; Dutch: Wat moeten we doen?) is the title of the most influential book of the Russian philosopher Nikolai Chernyshevsky, published in 1862. Beyond its historical context of a feudal country struggling with transformation, its title became an emblematic question for the need for change sought by persons, organizations and societies.

Our university, like other Dutch universities, needs a change. This is what the authors of an open letter ‘In Groningen heerst een cultuur van wantrouwen’ convincingly stated last week, naming a number of problems: bureaucratic micro-management, heavy workload, a rat race for research grants (on this topic, read my article ‘Russian roulette’ and discover the name of another great Russian author), top-down governance, unaccountable management, etc.

They asked the University Council to respond to their letter. Since the UR is not one person and – fortunately – not one party that has one opinion as will become clear in the following, I will respond on my own and on behalf of my party, the Science Faction (Wetenschapsfractie).

The list of authors of the open letter is topped by Mathieu Paapst, my colleague from the Science Faction. This should make clear our unconditional support for this open letter. I could stop here, but this would not be enough.

The crucial question now is, ‘What should we do next?’ After we have identified and named the problems, how can we achieve change?

In a previous editorial ‘We need more democracy’, I pointed to the solution to the named problems: we need a new system of selecting governors and managers at all levels of the university.

The current top-down system of appointed rather than elected managers has the consequence that a manager needs to be loyal only to the boss who appointed him, and not to the staff under him. This system is damaging the organisation and it will not listen to the complaints of the mentioned open letter as they are directed against it.

In 2014, the UK published my editorial ‘The silence of the rabbits’, very timely in the context of an approaching appointment of a new rector. I suggested that the University Council discuss the system for selecting governors with the Board of Trustees in our spring 2014 meeting, before the appointment of a new rector. Unfortunately, this proposal was not sufficiently supported by other factions.

In the autumn 2014 meeting of the Council with the Board of Trustees, our Science Faction and I suggested that the chairman of that board should adopt the system used at INSEAD (for details, read my article  ‘We need more democracy’). Our Science Faction also proposed that this issue should to be discussed in the meetings of the Council and the Board of Directors (CvB) in the academic year 2014-2015 (as in previous years) but unfortunately, this proposal did not get sufficient support by the other factions, either. 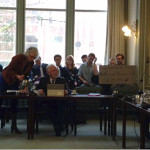 Meeting of the Board of the University (CvB) and the University Council on 26-02-2015. President Poppema listens to the plea of Nicolai Petkov for more democracy. In the background, student activists from De Nieuwe Universiteit Groningen hold a slogan ‘Democratie aan de RUG’.

Finally, in the February 2015 meeting of the Council and CvB, I openly and resolutely disagreed with the president of the university when he stated that ‘under the current law, it is not possible to have more democracy’ and that ‘for more democracy, the law needs to be changed’.

I told him that the current law does not forbid us from having search committees for governing and management functions and that if such committees do exist, they are as visible as Nessie (the cryptozoological Loch Ness monster), Yeti (the abominable snowman) or a UFO (unidentified extraterrestrial flying object).

I also told him that the current law does not forbid us in any way from having at least two candidates for each such position.

And I told him that the current law does not forbid us from allowing staff to vote for the candidates for such positions, so that the voting result can be taken into account in the appointment procedure.

The quests for ‘More democracy!’ and ‘Less bureaucracy!’ are leading in the program of our Science Faction in the coming University Council elections (May 18-25).

As for Chernyshevsky, he got a seven year heavy jail sentence (Russian: katorga, Dutch: TBS) and, after jail, was sent to Siberia for the rest of his life. But his book changed a society – some scholars think that it ‘supplied the emotional dynamic that eventually went to make the Russian Revolution’. And the emblematic question ‘What should we do?’ that it posed became a must for all people who want to make life better.

Nicolai Petkov is elected member of the University Council and chairman of the Science Faction.