Bringing students and townies together is easier said than done. Why get involved if the internationals leave in four years anyway?
By Traci White

Inside Alita and Max de Ruiter’s sprawling home on Kraneweg, homemade mustard soup and carbonade await their international guests. The De Ruiters, like 80 other families across the city, are taking part in Meet & Eat: opening their homes to a small group of students after day one of Experience Groningen, a two-day event for first year international students to get to know the city and province. 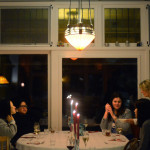 Their guests – Minjung Kim and Sang Eun Lee from Seoul; Natasha Lystia Rumambi from Jakarta; and Ann Thomas from Bangalore – spent the day exploring the city, following the Culture and Science tracks (Business and Sport were also options). They told their hosts that the highlights were the Blaauw observatory at Zernike and a dance performance by Club Guy & Roni.

The family regularly entertains large crowds for meals prepared by Max, and they were glad to have company. Over a candlelit dinner, they politely inquired about their guests’ lives back home, as well as what they like and dislike about Groningen.

Natasha, a 22-year-old from Indonesia doing a master’s in international relations, says she hasn’t eaten any rice in month because she’s so in love with ‘lekker’ Dutch food, from kibbeling to pannenkoeken – she has yet to try ‘drop’.

Over dessert, Ann, a 24-year-old PhD candidate studying cellular biology, said that she has Dutch housemates but had never been to a Dutch family dinner like this before.

Alita, born and raised in Groningen, admitted that Groningers are reserved when it comes to meeting new people, even by Dutch standards. But as the girls bundled up to bike through the cold to their next destinations, Alita eagerly offered all of them a room to stay and a free beer if they ever wanted to come by again sometime. ‘Hartelijk bedankt!’ Ann called as they prepared to go their separate ways.

Short of the goal

After locking up her bike outside the Infoversum, Ann headed inside for the Mit Mekander discussion. About 100 guests showed up for the event, which is roughly one-third of all the Experience Groningen attendees. The two-day event only wound up attracting 300 participants – short of the organizers’  goal of 500.

Tickets were cheap – only 12 euros – but holding it on a Friday and Saturday could account for lower turnout: Ann herself had to do some lab work on Friday morning and would have preferred if the whole event was held in the weekend instead. 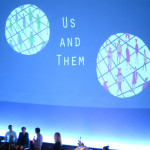 Under Infoversum’s starry domed screen, the crowd is two-thirds international students and one-third locals, including some of the Meet & Eat hosts. It’s an event that is part of both Experience Groningen and Let’s Gro, another local festival, but based on turn out, the internationals seem more interested in finding ways to bridge the gap than the other way around.

In fact, some of the Dutch audience members were perfectly satisfied with how open they perceive themselves to be, seeing their willingness to live side by side as enough. But to the international students in attendance, that is not the same as actually being involved in each other’s lives.

The panelists – Richard Wiltjer, an honours student at the Hanzehogeschool Groningen; Gea Veldhuis-Jeaggi, a local business manager; Hans van Ees, the dean of the University College Groningen; and Michiel Kasteleijn, president of the International Welcome Centre North – acknowledged that it takes guts for internationals to move beyond their English-speaking bubble and try to interact with city dwellers.

A Buddy System for Dutch students to be paired with internationals, hiring more municipality employees to help foreigners navigate government documents, and supporting more integrated housing policies were all suggested as ways to make it easier.


But as far as some city residents are concerned, what’s the point in bothering to get to know a student if they’ll just leave again in four years, if not sooner? That remark was channeled into the related question:  how can students stay after they graduate?

Something worth staying for

To Michiel Kasteleijn, the secret to making that happen isn’t hard: in addition to helping new employees moving to the north from abroad, IWCN also wants to enable the well-educated foreign graduates become the future employees of international companies in the region. ‘They need each other, but they haven’t found each other yet’,  he says, after the debate finishes.

In other words: if students feel like they have something worth staying for, they will likely be more willing to put effort into integration. When the question ‘Should we try to keep more internationals here in the north?’ was posed, one audience member shouted out: ‘Yes, please!’

Housing up for debate

Groningen in the Golden Age