Why is the buttercup so yellow?

How do flowers get their colours? And why? Biologist Casper van der Kooi placed the flowers on the operating table until he got an answer.
By Christien Boomsma / Translation by Mina Solanki 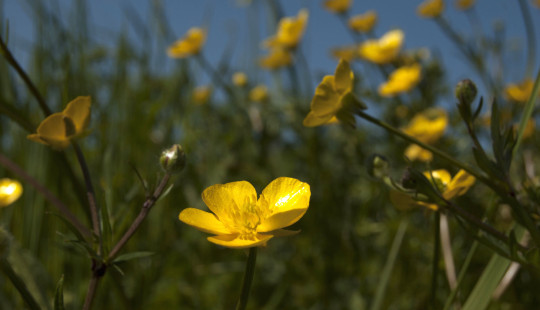 Buttercups create their colour in a special manner.

It is actually pretty crazy. Flowers are all around us – from bright yellow buttercups, to deep red poppies or bright pink Herb Roberts. But how do they produce their colours and why? Nobody had thoroughly looked into the matter until Casper van der Kooi got involved. He will receive a Ph.D. for his research on the 27th of November.

His favorite flower? It remains the buttercup, Van der Kooi says, after briefly considering the question; the common, bright yellow meadow flower with its characteristic sheen. There is no other flower in the whole plant kingdom with the same shiny structure, so it’s no wonder that Van der Kooi cut up the flower and put it under the microscope.

A clever move, as he discovered upon closer investigation. The buttercup does something very unusual: the pretty colour of the flower turned out to be more than a matter of pigment in the petals that reflects the yellow of the sun and lets the rest of the light through. ‘You can see that the flower has an extremely smooth top layer – the epidermis’, says Van der Kooi. ‘That is the where the pigment is, principally.’ Under the top layer, Van der Kooi found a very thin layer of air. ‘The air layer causes the top layer to become an extremely strong reflector. Together, these create a kind of film layer, just like oil on water or a bubble. This explains the shine.’ 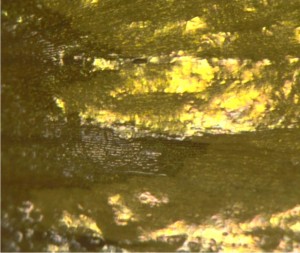 Close up of a buttercup petal.

The shine that we find so pretty does not, however, make the flower more interesting for insects. On the contrary, bumblebees and bees probably cannot see its shine. ‘Insect eyes have a much lower resolution than our eyes’, says Van der Kooi. ‘Many visual signals which we pick up are invisible for them.’

Van der Kooi therefore believes that the extra visibility of a buttercup due to its shine is a side effect. ‘The shine produced is greater when the light hits it at a higher angle’, explains Van der Kooi. ‘When it is colder, the flower closes a little, like a bowl. Then, it can reflect the light more easily back inside itself.’ In doing so, more light reaches the heart of the flower where the reproductive organs are. The extra light helps the flower to make seeds.

Insects find the flower earlier than others due to its saturated yellow color, but the buttercup is not unique in this aspect. Van der Kooi researched which aspect of the colour formation is important in increasing the visibility of the flower. He did this by measuring the light transparency of each layer of the flower – this is the reason that his Ph.D. lies at the intersection of biology and physics. He could now see that not only the wave length of the colours – the green, red or blue tint – or brightness mattered. Again and again, the saturation or purity of the colour was the most important. 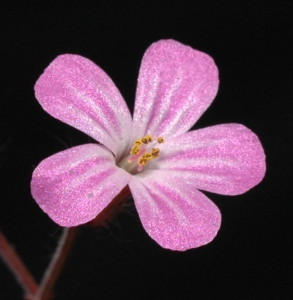 ‘Consider the Herb Robert’, says Van der Kooi, ‘That is a common pink flower which you often see growing between the tiles, somewhere in the shadow. If you cut through it, you can see that the pigment is all on one side, the upper side, with a white layer underneath it.’

The white layer also works as a diffuser in this case, so that the colour is more saturated if you look at the flower from above. And that is exactly what people and, more importantly, insects, do, because the flower is so small. ‘The Oenothera, however, which only blooms for one night, does it very differently’, says Van der Kooi. ‘That flower has pigment all over it. It probably does not need as much colour contrast, as the flowers are much bigger.’