‘With us, your phone is ready in 15 minutes’

You're hitting the dance floor, sprinting to the station to catch your train or texting while cycling. All of a sudden, your phone slips out of your hands or pocket like a bar of soap. Anxiously, you pick up your precious property, but it’s too late; the glass screen has already broken into a thousand pieces.
By Koen Marée / Translation by Mina Solanki

‘You could go to that shady store on the corner, but you could also come to us’, laughs Thom Hofman. The 22-year-old Business Administration student, along with 21-year-old Thijn Felix, are the guys behind PureRepair. ‘We can fix anything when it comes to telephones and tablets. Our repairer can even do it blind, if he has to’, he says with conviction.

Felix has been occupied with setting up a business for the last seven years. It started with his family and friends’ broken telephones. A few years later, he moved to Groningen and started a web shop for iPhone parts; it was a time-consuming affair. But, thanks to a few ‘inspirational’ evenings at the Vindicat pub, his friend Hofman became his new colleague.

Jump to 2016. PureRepair has its office in Cube050, a location where new entrepreneurs can go with their businesses. ‘We now have a complete repair division, and we have hired two people. We thought it was really strange that it often takes ten working days before your phone is repaired at a phone shop. Nowadays, your phone is much too important to wait that long. With us, your phone is ready in 15 minutes. Furthermore, we can look at it straight away if there are still problems with it.’

Mornings at classes and afternoons at work. Yes, it’s busy. ‘And in addition, Thijn is in Hong Kong at the moment. However, we’re still in contact almost every day. I principally take care of the operational part; Thijn takes care of the technical side of things. I will be going to South Korea in two months, and then the roles will be reversed’, says Hofman. 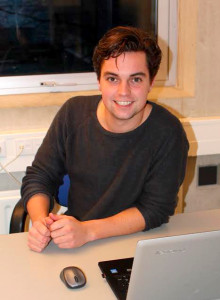 Thom Hofman wants to bring PureRepair to the rest of the Netherlands.

‘The fact that the combination of studying and working requires sacrifice is pretty predictable. But I feel that you should also do something aside from your studies.’ Their friendship doesn’t suffer from it, either: ‘When Thijn returns, it’s good for the business that we can sit down together again, but also to be able to drink a beer together and just take the piss.’

The duo isn’t earning any money yet. ‘That goes straight back into the business. We now have the luxury that we can afford that as students. We want to proceed with PureRepair for as long as we are in Groningen, which is now another year and a half. After that, we will have to see whether it is actually successful and take stock, but we won’t let it bleed to death, that’s for sure.’