He is the driving force behind the PhD. experiment which, if everything goes according to plan, will start at the RUG in September. For Lou de Leij, however, it is not a matter of ‘if’: he foresees no problems.
By Selma Hoekstra / Translation by Sarah van Steenderen

Lou de Leij, dean of the Groningen Graduate Schools, is a happy man. He has had a plan at the ready for some time, of course. He has been working together with the Graduate Schools project leader Marjan Koopmans to develop a bursary experiment for the RUG for over a year. He hopes to be able to implement the plan soon.

When the Ministry of Education decided not to incorporate the bursary system into the new Education Act, it seemed that the bursary positions were done for. However, minister Bussemaker created a loophole in the form of an ‘experiment’. This experiment should make clearer what the obstacles are. Many are already known: some of them were at one time the reason for the AIO system (the predecessor to the current system, ed.), others came to light in a series of lawsuits about the issue (see box ‘The history of bursaries’).

‘This is a good plan’

But De Leij is optimistic. He is convinced that his plan is good. On his desk is the printed version of the  governmental decree. This contains the frameworks to which the experiment has to conform.

In De Leij’s plan, bursary PhD. candidates will receive a net salary of 1,700 euros a month. If that is subject to taxation, then the amount will have to be changed. ‘You can easily survive on 1,700 euros’, says De Leij. ‘But it shouldn’t be any less than that.’

Bursary PhD. students are not granted employee status, do not accrue any pension and are not entitled to a redundancy payment scheme. This has been criticised a lot. De Leij brushes aside that criticism. ‘We’re talking about young people who have plenty of time to accrue a pension. And we’ve seen that the redundancy payment scheme makes bursary PhD. candidates graduate sooner and on schedule more often than without it.’ Still, De Leij wants proper health insurance and disability insurance to be made available.

The Netherlands as a knowledge economy

‘They don’t dare offend them’
‘However’, De Leij continues, ‘the most important thing is that bursary PhD. candidates can pick their own subject and supervisor.’ This curiosity-driven approach should encourage these PhD. candidates to be bolder in their research. The plan will also allow them to indicate which specialisations and extra courses they feel are necessary to their research and general education.

‘The second condition is important as well’, says the dean. ‘We want to better prepare the PhD. candidates for a career both within and outside the university. De Leij thinks too few PhD. candidates are prepared for the job market. ‘That can and should be better. We want people to pay more attention to that during the PhD. track.’

One of the reasons the plans for the PhD. experiment are criticised is because it concerns budget cuts. De Leij objects to that: ‘There will be no budget cuts. On the contrary, we can now hire more PhD. candidates for the same amount of money. If the Netherlands wants to be higher on the list of knowledge economies, then we have to produce more PhD. candidates. And we can do that.’

Most Dutch universities are hesitant about experiments such as this. ‘They’re too cautious’, says De Leij. According to him, many universities fear the reactions from the current PhD. candidates: ‘They don’t dare offend them. They’re afraid of the PhD. candidates on the university councils and think this is how they do them a favour, which is obviously untrue.’

Time is running out 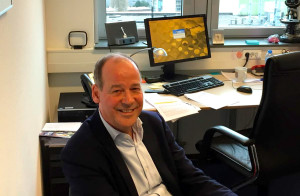 De Leij doesn’t seem overly afraid of criticism himself. ‘I’ve been working on the plan for a long time and I try to involve everyone as much as possible. Together with Koopmans, I went to all the faculties to hear their criticism. That was not a lot of fun, but it was necessary and illuminating. Then, I tried to assuage that criticism as much as possible by presenting solutions. Right now, it looks as though all the faculties agree with the plan and will join in.’

PhD. organisations GRIN and Gopher are also closely involved. Eric de Vries, Gopher’s chairman, has faith in the plans. ‘The difference with all the previous plans is that there are better fringe benefits. There are some remaining steps, of course, but we’re positive.’

De Vries is especially satisfied with the option of writing your own research proposal. ‘This could lead to fewer predictable research proposals and that would be pretty cool’, says De Vries. GRIN is also placated and says in a statement that the plan can contribute to improving the university’s international standards.

Time is running out. The plan has to be handed in to the Ministry of Education before 15 March. De Leij is feeling the pressure. He has to get the College of Deans to agree with the plan before that time. The University Council also still needs to discuss it.

The minister will decide which experiments to improve before 1 May. Next, they can recruit PhD. candidates. In September, they can start the experiment. De Leij is confident. He is convinced that Education minister Bussemaker will approve his plan.

The history of bursaries

This system was implemented because of the low number of PhD. degrees. An AIO is an employee and is covered by the collective labour agreement. This did not include foreign PhD. candidates.

The University of Amsterdam (UvA) began appointing bursary PhD. candidates in 1995. Assisted by the Abvakabo union, several of these bursary PhD. candidates went to the district court to prove that their contract with the university should be considered a work contract. Initially, however, the district judge decided that the position did not constitute ‘work’ as defined in article 7:610 of the civil code.

In 1999, the UvA bursary PhD. candidates appeal the district court’s decision, and this time, the court finds in their favour: the position does constitute work. The UvA then decides to take the issue up with the Supreme Court, but they uphold the decision.

On behalf of 13 Groningen PhD. candidates, Abvakabo FNV sues the RUG. Their goal: the PhD. candidates want their ‘training contract’ to be considered an actual work contract. At that time, they still received a grant that was roughly similar to the net amount an AIO gets, but the tax services taxed that amount, to their detriment. The district court ruled in favor of the PhD. candidates at the time, but the RUG got its way in 2013 when they appealed.

In 2011, undersecretary of Education Halbe Zijlstra (VVD) wanted to make it possible for PhD. candidates to receive a grant rather than a position as AIO. This would effectively give PhD. candidates the status and income of a student (approximately 800 euros a month), and would force them to get a second job. The plan engenders a lot of criticism.

In late 2012, the Council of State advised against this plan. Minister Bussemaker says she wants to do small-scale ‘experiments’ with PhD. candidates.

2016: Universities can submit their plan for the PhD. experiment.