The electronic ballot boxes for the university elections are closed, and the student parties are disappointed by the voter turnout.
By Peter Keizer / Translation by Sarah van Steenderen

Less than 28 percent of the students have voted in the elections for the University Council. Last year, that percentage was 31.7.

‘Abysmal’, says SOG faction president Alexander van ‘t Hof. ‘The university should focus more on the university elections, and the parties should be given better opportunities to show what it is they do. We spend a year working full-time to improve the university and to address student complaints, but we often lack the means to actually tell the students of Groningen about this.’

‘I have been doing this for 14 years, and this year, the turnout is fairly low. Usually it’s around 30 percent’, responds Pascal Alders, who works at the RUG’s Central Electoral Committee. In 2014, 30.9 percent of students voted. At that time, rector magnificus Elmer Sterken called the turnout outrageously low. At least half of the students should support the University Council’, he said back then.

‘The higher turnout last year was probably due to the occupation at the Maagdenhuis in Amsterdam. The much lower turnout this year is likely attributable to students feeling under-represented and unheard in the elections. That is one of our priorities as a party’, says Lijst Sterk faction president Teunis Dokter.

‘The turnout is a bit lower than last year’, says Lijst Calimero’s Nathalie Niehof. ‘But we almost made it to 30 percent.’

The results will be announced on Wednesday at 5 p.m. in the Bruinszaal in the Academy building. 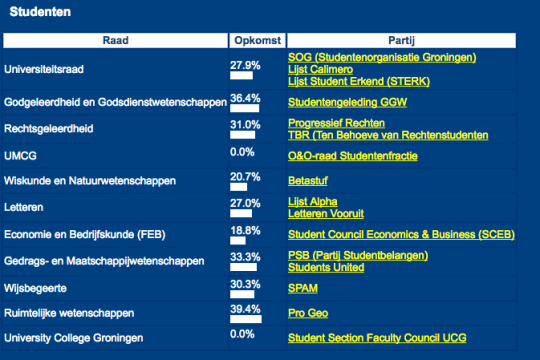