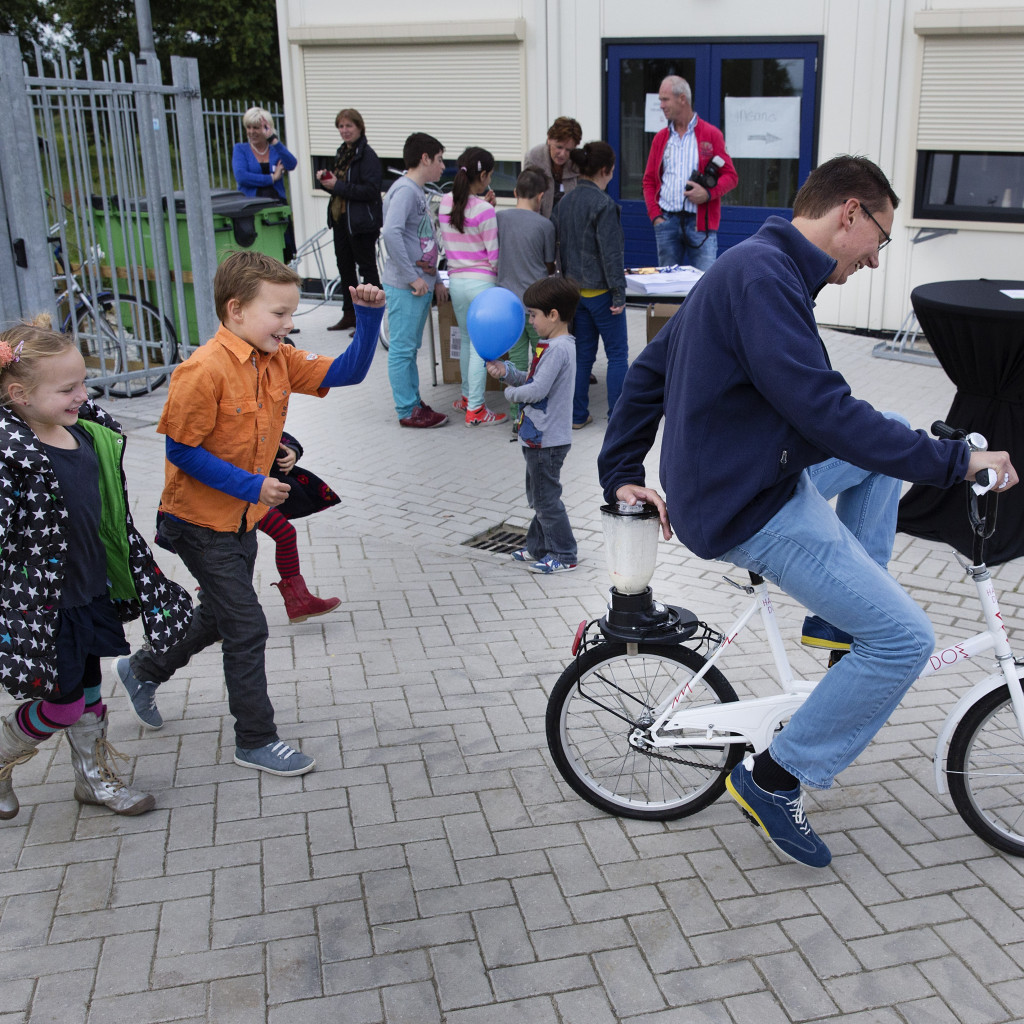 What are those researchers doing on Zernike? Inventing a bike that makes smoothies, people discovered this Sunday.

Six adults and four children are standing around a square scaffolding next to the EnTranCe building on the Zernike Campus. Four poles are holding up some plastic bags. A closer look reveals that the bags are filled with greenish water.

Technical engineer Niek van Prooijen asks if anyone knows what they are. If they don’t, he is more than happy to tell the visitors to this experimental energy showcase all about them. The bags contain algae and are part of Zpannend Zernike, the day the University of Groningen and the Hanze University of Applied Sciences show the public exactly what they are researching on the University Campus.

‘These are algae growing in seawater’, Van Prooijen explains. ‘What kind are they?’ asks one of the visitors. ‘The green kind’, the engineer jokes. He smiles. ‘We grow them to feed the bacteria in the bio fermenter over there’, he says pointing to a blue container. Inside it a group of six people are listening to a researcher explaining how he hopes to produce bio gas from bacteria.

After the algae Van Prooijen takes his visitors on a short tour around the rest of the EnTranCe compound. EnTranCe is short for Energy Transition Centre, a testing facility for the Energy Academy Europe that was started up last year by Hanze University of Applied Sciences, the University of Groningen, Energy Valley and GasTerra. Eleven projects, focusing on bio energy, decentralized balancing and sustainable traffic systems, are being tested there at the moment.

Inside the Centre researchers are showing the public how to make drinking cups out of recycled plastic and how a bicycle then fills them with smoothies when it’s ridden. Both experiments are extremely popular among the kids running around the compound, many of whom were transported to the building in electric cars running on solar energy.

Among all these experiments Mathematics Master’s student Niels Jansen is explaining the formula to calculate the best height for a windmill. ‘We have five different types of windmills to test’, he says and points to the sky. ‘Which one produces the most energy?’

Jansen is conducting research on the energy network for his Master’s thesis. He’s actually not from Groningen, but from Leiden University. ‘However, I’m doing part of my research here as part of an internship. This kind of playground is unique.’

He’s one of a growing number of researchers who have joined the Academy this year. ‘When we started, I was all alone’, says Managing Director Jeroen van den Berg. ‘However, I’m negotiating with interested companies and students almost every day now. I bet we’ll have to build new offices soon to host the new arrivals.’