The Behavioural and Social Sciences buildings in the Hortus neighbourhood were briefly evacuated due to smoke on Tuesday afternoon.
By Peter Keizer / Translation by Sarah van Steenderen

In the courtyard at the back of the Heymans building, a smouldering cigarette had fallen onto some leaves, causing a plume of smoke. The smoke was drawn inward through the ventilation grate beneath the floor of the building.

‘We smelled it around the electric boxes. So at first, we thought there was something wrong with the cables’, says building manager Jan Stalman. ‘We immediately evacuated the basement while we waited for the fire department, but they said we should immediately evacuate the whole building.’

Two fire engines were on the scene and the Grote Kruisstraat was cordoned off, but it turned out there was no fire. The smouldering leaves were quickly doused, after which students and employees could go back inside the building.

‘You never know what’s going on. It might as well be a fire. That’s why we decided to immediately evacuate the buildings’, says a spokesperson for the fire department. ‘We did a thorough inspection, and everything is safe again.’

Half an hour after the evacuation, classes were able to resume. ‘At least it was good training for the health and safety officers’, Stalman jokes 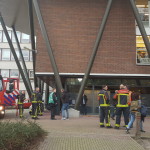 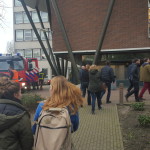 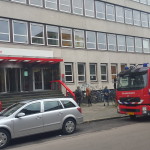 No new campus for BSS

'How does allocation work?'