Chlamydia is as ‘popular’ as ever among students, but genital warts are breathing down the STI’s neck, research from the GGD shows.
By Peter Keizer / Translation by Sarah van Steenderen

Chlamydia remains the most prevalent sexually transmitted infection (STI) in the north of the Netherlands. The STI mainly afflicts young heterosexual people up to 25 years old, the GGD concludes.

Last year, 664 people in Groningen had chlamydia, which was approximately 65 per cent of all diagnoses in the province. The public health service also notes a ‘striking increase’ in genital warts, a disease where skin disorders form around the genitals and anus.

The number of visitors at outpatient clinic Sense Noord-Nederland has declined for the first time: there is a 20 per cent decrease in relation to last year. According to the GGD, this is due to the anonymous online test introduced on soapolinoord.nl last year, as well as the fact that the organisation is more focused on high-risk groups, such as young people under the age of 25, homosexuals, immigrants, and prostitutes. 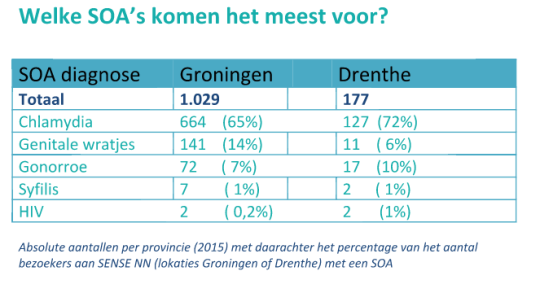 Hold your breath for science