Cyclists to Zernike have priority

The municipality wants to make cycling to Zernike safer. The bike paths will be widened and cyclists will have priority when they cross the Eikenlaan.
By Peter Keizer / Translation by Mina Solanki

A year and a half ago, the municipal council of Groningen decided to free up 800,000 euros to address the cycle routes to Zernike. For a few years now, the municipality has been trying to encourage cyclists to take the so-called ‘smart routes’ to campus. However, many feel that the proposed routes are dangerous. According to the municipal plans the situation will be finally tackled.

One of the busiest spots on the route is the intersection at Eikenlaan. ‘Research is currently being done into whether cyclists can have priority at this cyclist crossing’, writes council member Jaap Valkema on behalf of Spatial Planning.

The design is already finished and should be implemented by the end of this year. There’s only one problem: the police and the public transport (openbare vervoer – OV) agency don’t think it will work. They fear that the intersection will only become more dangerous if the buses have to stop for cyclists. According to Valkema, the criticism is being looked into. He promises that the crossing will be improved before the next academic year.

The bike paths in the Selwerd park, a green space along the Zernike route, will also be upgraded. They need to be rerouted and widened before the summer. The current cycle path and foot path are going to be switched to ensure more space, and 70 trees will also be cut down in order to give cyclists plenty of space.

Furthermore, more parking spaces for bicycles and bicycle sheds have to be made available in the city. Among others, a parking garage is the Haddingestraat, close to the Vismarkt, is being considered for conversion into a cycle shed.

Funding of 150,000 euros will be made available to improve the bike sheds beneath the Public Library and on the Peperstraat. Students also need to be better informed about where the bike sheds are located so as to prevent them from parking their bicycles in front of the University Library.

The municipality is in a hurry to set these plans into motion. The city would very much like to win the Cyclists’ Federation election and become Cycling City 2016.

On Wednesday evening, the council met to discuss the plans. 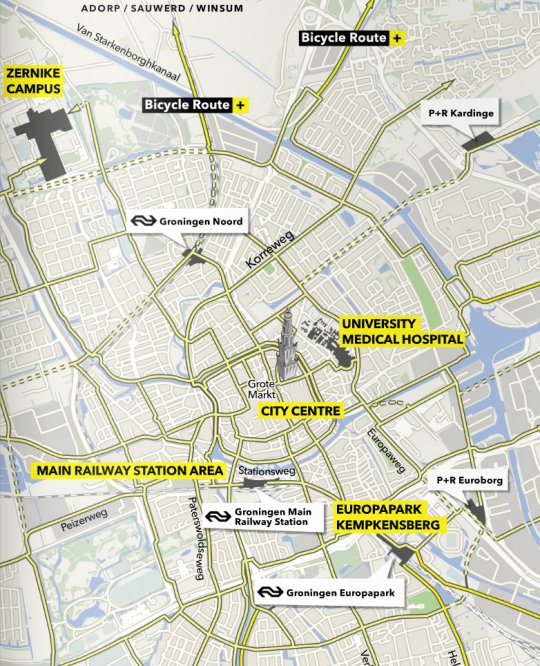