FameLab: ‘No, she won’t lick anyone’

Three female researchers from the RUG captured the top spots at FameLab – so far, they’re more familiar with the ‘lab’ than the ‘fame’.
By Traci White

Host of the FameLab, Bart van de Laar, assures the audience as Mandy Koopman takes the stage that she won’t lick anyone. Koopman, a master’s student in behavioral and cognitive neurology, goes on to give a surprisingly seductive speech about the role of memory loss in the sexual behavior of fruit flies. Licking is a part of their so-called courtship, Koopman explains enthusiastically.

High fives for the winners

Koopman, Maia Elliot and Arunima Roy – all three working and studying at the RUG – were declared the top three presenters during Thursday night’s FameLab regional heat in the Aa Kerk. The runner up – Gianmarco Bet, a PhD candidate at the University of Eindhoven – had to leave to catch a train, missing out on the congratulatory high fives.

The 15 presentations felt more like an open mic night at times: there was a poetic presentation about galactic imaging and a ballet routine about the science of meditation – pirouetting is apparently similar to distraction. The Death Star, a Mafioso and a fake joint were also used to try and win over the judges, but what really mattered was telling a good story. The best presentations were the ones that didn’t leave the audience feeling like they had been cornered at a party. 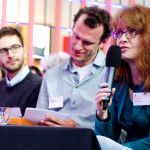 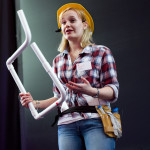 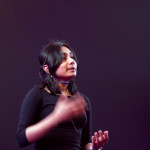 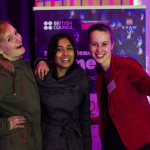 ‘It was about the ones where you just wanted to hear their story’, says professor Natasha Maurits, one of the panel of three judges. ‘For the winners, I didn’t have time to write many comments because I was so captivated by their speeches.’

Each presenter had 180 seconds to describe their highly technical research, getting a squeak from a bike horn if they went longer. Elliot, one of the winners and still a bachelor student, got the horn in the middle of her conclusion: ‘If we want to live two times as long as our ancestors-‘ SQUEAK ‘-we need to be a generation of genetic plumbers’.

The third winner, Arunima Roy, is a PhD candidate in psychiatry and managed to avoid the dreaded squeak. She didn’t need any props during her presentation about brain maturation and development to secure the third spot. She attributed children’s abilities to pick up new skills to their malleable, clay-like brains, and compared her own adult mind to a hardened brick.

The three winners and the runner up will get the chance to present again on 22 May in Amsterdam along with the other winners from the Benelux competition – Wageningen UR and Brussels also had regional heats.

One winner from that event will go on to the Cheltenham Science Festival in England in June to compete against the winners from 24 participating countries.