Students who lived at Diaconessenhouse during the first semester of this study year are imminently getting their compensation from the RUG, Hanze University of Applied Science and SSH. But the decision to pay back the current students has led some former residents to call for compensation, too.
By Nina Yakimova

Former student residents of the beleaguered Diaconessenhouse have voiced concerns about the fairness of the compensations plan of the RUG, Hanze, and SSH. ‘The living circumstances during the study year 2012/2013 were even worse than now and back then, Housing Office did not react to any complaints. I personally have written so many emails and comments in the housing survey about the conditions in the house’, says Marcel Schmidt, a master’s student in Industrial and Organizational Psychology at the RUG.

Schmidt and 26 other former residents sent a signed letter of complaint to the RUG, Hanze, and SSH on Friday. ‘I have written an email to the RUG’s spokesperson and SSH asking if we are going to get compensated as well. Unfortunately, I got an answer that does not satisfy the former tenants and me’, says Schmidt.

Standing by their decision

So far, however, the RUG, Hanze, and SSH are standing by their decision to limit the compensation for student residents who were living in the buildings this study year only.

‘Last fall, the complaints have reached a level at which our board decided to act and a decision was made to give a small compensation to students in the first semester and a somewhat bigger compensation for the students in the second semester of the 2015/2016 study year. There will not be any further discussions with SSH about compensations for other years ’, said Gernant Deekens, spokesperson for the RUG.

Jolien Stokroos, the manager of SSH Groningen, confirms that the compensation will be only for students who lived in Diaconessenhouse in the 2015/2016 academic year. De Huismeesters, who not only provide maintenance for Diaconessenhouse but were also the group behind the Housing Office – SSH’s predecessor – until the fall of 2014, declined to comment and redirected emails to SSH.

Nevertheless, Schmidt is convinced that compensation is also in order for former student residents. ‘And especially the people who lived there in 2012/2013. During that time, all the demolition work around the buildings was done, as well as the main process of asbestos removal‘, Schmidt says. 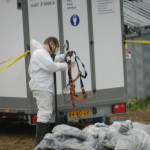 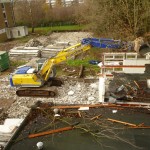 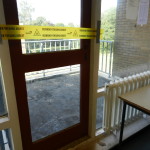 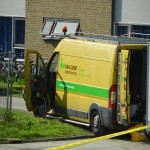 ‘Workers were removing the asbestos in protective suits with masks and everything, while the building was not evacuated and lots of students had their windows open. All the other problems and thefts were already happening in 2012/2013 as well.’

Compensation on the way