As students are moving in, the rechristened Frascati International Student House – formerly the KPN building – is still not completely done.
By Traci White

Jesse van Mourik, a communications advisor at SSH, says that the bedrooms, showers, toilets and kitchens inside the building, located directly beside the Groningen central train station, are completed and are ready for use by residents who have begun moving in this week. But there are still some finishing touches to be made.

‘The goal was to have everything completed this week since students would be moving in, but unfortunately, there have been some delays with the delivery of larger furniture pieces for the common areas. There is also some painting that still needs to be done and the décor has to be finished’, Van Mourik says.

The majority of international students coming to the RUG and the Hanze are expected to arrive this week. ‘There should be about 1,200 students showing up between then and the first week of September’, SSH spokesperson Annemiek van Vondel says. Up to 210 students will eventually be moving into the Frascati International Student House, including 50 for the University College Groningen. A new branch of the ACLO sports facilities will also be located on the property. 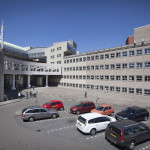 SSH has roughly 1,500 rooms available in total in Groningen for students at the RUG and the Hanzehogeschool, and Van Vondel says that all of them are booked at this point. That means that several hundred students will have to try to find a room on their own in the private market. Unlike recent years, the housing office was unable to arrange for a boat to moor in the city for the first semester of the school year.

Even though some students are left to their own devices in the housing market, Van Vondel says that Groningen takes a more active role than other cities. ‘Groningen is focused on international students in particular, and they think it’s important to make sure that housing is really handled well so that the students have a good experience here’, Van Vondel says.

Although up to roughly one-third of international students, Germans in particular, choose to look for a room on the private market rather than relying on SSH, it can still be quite tricky for students to secure a room from afar. In 2014, there were 1,478 new international students at the RUG and 1,580 have been registered at the university for this academic year so far.

Compensation on the way