After an exciting season, the women’s basketball team the Groene Uilen won the championship this weekend. The Rotterdam EBA Baros were beaten 80 to 71 in a thrilling final game in Zwolle on Saturday.
By Koen Marée / Translation by Sarah van Steenderen

Anyone climbing the rooftops a few months ago to shout that the ladies from the Groene Uilen (Green Owls) would win the championship would have quickly been yanked down. The team, led by coach Kaj Reker, was not performing consistently well and really had to pull out all the stops to even make it to the top four in the national division. Only those teams were allowed to battle it out for the championship in the play-offs.

After finishing third last season, the Groene Uilen line-up remained largely the same, albeit with a few new young reinforcements. But fitting the new members into the team turned out to take longer than expected. Things did not start going smoothly until the last two months, when the pressure on the team was at its highest. ‘We had to win at least six out of the last eight games. It was like playing the championship every time, and we were all aware of that’, says Reker.

The Groningen team grabbed a spot in the play-offs on the final day of the competition. The Grasshoppers from Katwijk aan Zee made it to the fourth position, and the Groene Uilen were through to the Final Four. ‘We grew tremendously in that last phase of the competition. We weren’t afraid to call each other on our attitude, and we’ve all grown to trust each other more. We were able to use that in the play-offs.’

In the play-offs, DAS from Delft was defeated first, and in the finals, they had to face off against EBA Baros. The 150 Groene Uilen supporters blew horns and sang club songs to taunt their opponents from Rotterdam. The atmosphere in the stands was great, but on the court, the Groningen women fought every inch of the way. With the title within reach, the Groene Uilen just had to have it.

The Groene Uilen quickly got the lead and refused to let it go. By halftime, they were eight points ahead and after the third quarter, the Groningen team had secured a 13 point lead. ‘And yet Baros came really close in the end; they were only two points behind’, said Reker. ‘Thanks to proper steals and scores, especially ten free throws from Kim Jaasma, the team managed to win.’

The championship will probably not lead to a promotion to the premier league. ‘That’s really difficult to achieve for a small student club. The Dutch premier league consists of seven teams. They train twice as much as we do and they have sponsorship. We were the only lower division team to make it to the quarter finals in the tournament. That’s where we faced number seven and lost quite severely. It might be interesting if they expanded the premier league. But the board might think differently, or there might suddenly be a financier to help with reinforcements. But I’m not expecting it.’

The party erupted after the final buzzer. Reker: ‘We were expecting to be honoured on the steps of city hall. There were quite a few people around on Saturday night and there were a lot of festivities. In the end we took a turn on the Ferris wheel and then went to our favourite pub. It was one long party.’ 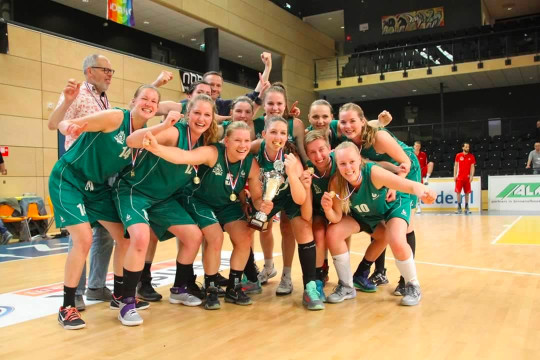