There are still thousands of people protesting against the Turkish Prime Minister, Recep Tayyip Erdoğan, in Turkey. Turkish students and their supporters held their own protest on the Grote Markt last weekend.
By Ahmed Farah

‘It’s not a Turkish spring’, says Can Kusoglu, a 29-year-old Tourism student. He, his girlfriend Hande Ozgen and 43-year-old Groningen resident Esra Balcioglu organized the meeting on the Grote Markt in support of the protests in Istanbul and other Turkish cities. ‘People don’t want their personal freedoms infringed, like when they can have a drink.’

Hande, a 26-year-old PhD student at the UMCG, agrees. ‘There are people in Istanbul who don’t know what’s happening in Taksim.’

She contacted Esra on Facebook to organize the event. ‘Social media is very important. In Turkey only one television channel was showing what was happening in Taksim when the protests began. They were covered on the international news channels, but not on Turkish ones.People spread the word through Twitter.’

Istanbul may seem calm now, but a lot is still going on in cities like Ankara. 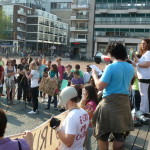 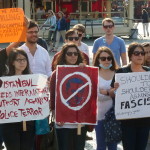 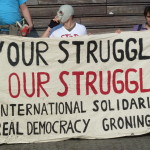 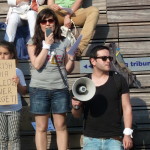 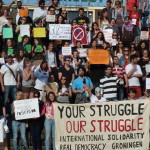 Many of the students at the Grote Markt event had friends or family involved in the protests. Can’s sister tried to join the protests in Istanbul, but could not cope with the police’s tear gas. She can’t sleep either, because she lives near the Prime Minister’s office.

A woman left the Netherlands to join the Istanbul protests with her brother, Hande says. ‘She said that at least she wouldn’t worry so much about him if she was with him.’

Alexandra Crisan, a Romanian student and the only international student on the University Council, also supported the Grote Markt event. Having visited Taksim many times, the issue was close to her heart.

Others, like 22-year-old Petra Tuna, had their own reasons for attending the meeting. The International Communications student from Germany has relatives in Turkey and resents the way the Turkish government treats Syrian Orthodox Christians.

Redan Usman Effendi, a 40-year-old Indonesian IRIO PhD student, joined the protest when he spotted it on his way home from work. ‘I always like it when people express themselves peacefully.’