The University Museum’s rhino, Fritzi, is going to Amsterdam next week. The skeleton is one of the objects in Groningen that guest curator Wim T. Schippers chose to show in the second pop-up museum organised by popular talk show De Wereld Draait Door.
By Christien Boomsma / Translation by Sarah van Steenderen

Schippers will not arrange a separate exhibition space like the other DWDD guests, says Ter Sluis. Instead, he will focus on ‘interventions’. The objects from Groningen will be shown in different places along the route in the Allard Pierson Museum. For this, Schipper mainly selected objects that he also used during the re-opening of the University Museum (UM) in 2004, such as biologist Baerends‘ seagulls and psychologist Heymans’ optical illusions. 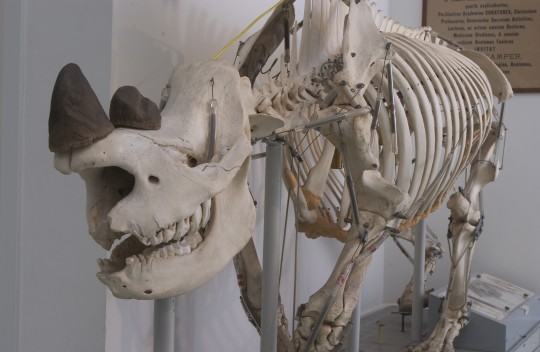 The skeleton of the rhinoceros, Fritzi

There will, however, be more factual information this time – many people were disgruntled at the lack of it in 2004. New objects – such as the ball pit from 2004 – will not be shown.

The temporary move is happening as soon as next week. The exhibition will open to the public on January 29. Fritzi needs to be hauled across the Rokin, a major street in Amsterdam, and a window in the Allard Pierson Museum has to be removed in order to get the huge skeleton inside. ‘It’s all done very quickly and professionally,’ museum curator Rolf ter Sluis says. ‘Typical De Wereld Draait Door, so to speak.’

In addition to the UM, many well-known people have been selected by the regular guests of Matthijs van Nieuwkerk’s television programme. Carice van Houten will be arranging a room using objects from the Kröller Möller Museum’s depot and Paul de Leeuw will focus on the Boijmans van Beuningen. Curator Rolf ter Sluis thinks it is really great. ‘Just for a little while, you’re part of the world of big museums.’ 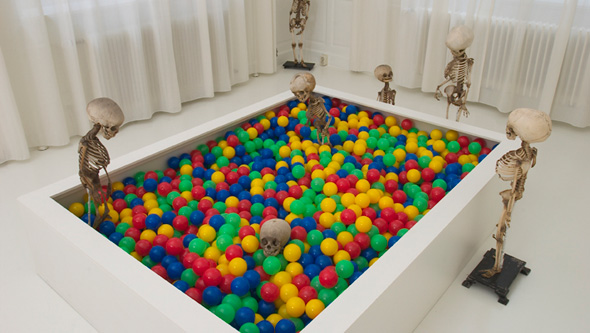 The ball pit by Wim T. Schippers during the opening exhibition in 2004.