Around 450 student rooms will be built in De Trefkoel, an under-construction building project in the Paddepoel neighbourhood, SSH confirms.
By Traci White

The Utrecht-based SSH will be supervising the addition. ‘The first step toward improving the quality of student housing will be the realization of 450 new student rooms in the second phase of construction of De Trefkoel in the Paddepoel neighborhood,’ Maurice Both, communications advisor for SSH, says.

The building is located on Zonnelaan in Paddepoel, a neighborhood in the northwest of Groningen which is close to the Zernike campus. Phase one of the building has already been completed. The building, commissioned by Nijestee and designed by Kenk Architects, is projected to cost 17 million euros. Construction on phase two, which includes the student rooms, is scheduled to begin this month.

De Trefkoel will have two main components: a 50-meter high residential tower and a comb-shaped living block. It is designed to be mixed use: students will have people in assisted living and autistic youth as neighbors. Communal facilities will be housed on the ground floor, such as a Laundromat and a coffee corner. A ‘neighborhood canteen’ where residents can prepare their own food will also be located there, and it will be open to the public. 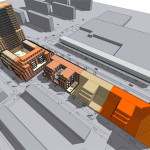 A design of De Trefkoel by Kenk Architects, located on the Zonnelaan near Zernike.

Remco de Maaijer, strategy manager for SSH, says that the date of completion and the rental price of the rooms is not yet known. Although SSH has also overseen housing in the Netherlands that is a mix of international and Dutch students, De Maaijer cannot yet confirm whether or not De Trefkoel will be available to Dutch students to rent.

There are five other locations in the city that SSH is also considering as potential new international housing sites, but De Maaijer points out that using them exclusively for internationals would be more than the non-Dutch student population really needs. Above all, any plans remain to be discussed:  ‘We will be considering all the options with the RUG and the Hanze in the coming months.’