‘In China, you have to ensure your own academic freedom’

At the New York University campus in China, academic freedom prevails, says a Dutch scholar who teaches there. ‘However, it is not a given: you have to ensure it.’
By HOP / Petra Vissers / Translation by Mina Solanki

‘I am not saying that it is loads better than expected in regards to the human rights violations in China’, begins assistant professor Lena Scheen. ‘Nor that it is perfectly set up when it comes to freedom of speech, not at all. But I still think it is a good idea for European or American universities to go to China.’

Scheen is doing research into the impact of globalization and urbanization in China and has taught at the so-called branch campus of New York University Shanghai since 2013. The RUG wants to open a similar campus in the Chinese city of Yantai, but not everyone is unanimously enthusiastic about this. Staff are not sure what to think, and in the House of Representatives, the Socialist Party is worried about academic freedom and human rights in the country.

‘In these kinds of discussions, many issues are intermingled’, says Scheen. ‘Human rights is a broad concept, and if you start discussing it, you quickly run the risk of hypocrisy. Human rights are being violated everywhere unfortunately, also in the Netherlands. Critics think that you automatically approve of the human rights violations if you open up a campus in China. I do not believe in that.’ 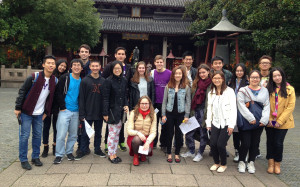 Assistant professor Lena Scheen (kneeling in the middle) with her students in China.

Once students and staff leave the campus, they are back in China. That feels strange sometimes, Scheen admits. ‘You cannot say as a university: we want our students to be able to do things off campus that are illegal in China; for example, hanging up posters of the Occupy movement.’

‘In my lessons, quite a few sensitive issues are covered. The Cultural Revolution [which cost millions of people their lives in the sixties and seventies, ed.] is certainly a sensitive subject for the parents of the students. What is interesting is that the students have to process what they have learned in a Chinese context. They talk about it with their parents and friends, and that does not happen when Chinese students study in the U.S. Often, they then return from America disillusioned or they do not want to have anything more to do with China.’

On campus, everything is allowed. NYU Shanghai even has its own servers so that everyone on campus can use Facebook and Google without being censored. ‘That is a crazy tolerance policy. It feels very inconsistent, as this is still a privilege in the perspective of most of the Chinese people. If I could give some advice to Groningen, I would definitely say that having your own servers is a requirement.’

The campus is a bubble, Scheen admits immediately. ‘I have worried about that. Our Chinese students instinctively know what can and cannot be done: talking about the Cultural Revolution with friends and family is fine, but you cannot write a blog about it. If you should want to tweet about it, you would be better off tweeting in English, not Chinese. We do, however, have a lot of foreign students from all over the world. For them, it is more difficult regarding what is and what is not ok. I have been scared before that they could be too naïve and then I thought: do I have to now remind them that we are in China?’

The RUG should not take academic freedom in China lightly, emphasizes Scheen. ‘That is not a given, you have to ensure it. However, you cannot hold globalization and internationalization back. The three great problems of our time – the economic crisis, climate change and migration – are all transnational.’

These problems can only be solved by educating a generation that knows and understands different cultural backgrounds, she says. ‘Those people will then understand why some solutions for climate change will not work in the current Chinese political system, and why others might. We won’t get anywhere if we pretend that China is only full of malicious people who want the worst for their people.’