International students love soft drugs even more than the Dutch. However, they overestimate the use of hash and weed in Groningen.
By Christien Boomsma

Three students of Applied Psychology from the Hanze University of Applied Sciences researched how internationals feel about soft drugs in Groningen for the research institute Intraval. It’s a question that is increasingly important as even more internationals are coming to Groningen. 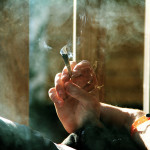 Jeff Schaafsma and Hanna van Wagensveld surveyed 476 students from Groningen – both Dutch and internationals – on how they perceive the use of soft drugs in Groningen.

In a second study, Sandra van der Wijk conducted in-depth interviews with a number of internationals that actually use soft drugs to find out what influence perceptions have on students’ actual behaviour.

All three students were awarded their bachelor’s degree this week for their work.

International students are more positive than Dutch students about hash and weed. German internationals are especially positively minded. More than 80 percent of them have used soft drugs or visited a coffeeshop at some point. ‘For Dutch students, this percentage is much lower: 63 and 55 percent’, says Jeff Schaafsma.

On the other hand, internationals think that the Dutch use soft drugs more often than they actually do. ‘They see a lot of people around them that use soft drugs’, Schaafsma thinks. ‘So, they perceive the use of it as more normal than is actually the case.’

These findings are similar to those that RUG-psychologist Tom Postmes found about alcohol use among Dutch students about two years ago. Students estimate the alcohol consumption around them to be higher when they feel that drinking is considered ‘normal’.

For her thesis, Sandra van der Wijk interviewed internationals that actually use soft drugs. ‘International students think they are coming to a country of tulips, windmills and soft drugs’, she says. ‘When they come here, that’s what they see. They also notice that nobody is surprised when someone smokes a joint. It’s like the use of alcohol back home.’

They use more soft drugs during their stay in Groningen than they did back home, even though most of them had used hash or weed before. ‘However, it was not a reason for them to come to the Netherlands’, Van der Wijk says.

Van der Wijk says it’s important that more information about the ‘gedoogbeleid’ – ‘policy of tolerance’- and the effects of soft drugs are made available to internationals. ‘They think soft drugs are legal, but of course, they’re not. They don’t know they are not allowed to smoke a joint in public, or how much weed they are allowed to carry.’

Internationals also know little about the possible risks of soft drugs. One student suffered from a panic attack and only later discovered it may have been related to the use of soft drugs. ‘Had she known that you are more prone to an attack when you’re suffering from depression and use drugs, this might have been prevented.’