Following the publication of research by RUG professor George de Kam, the Lower House wants a debate about the devaluation of houses in the earthquake zone.
By Peter Keizer / Translation by Sarah van Steenderen

The recent research done by the honorary professor of public housing and land markets revealed that the value of houses in the province of Groningen has declined by at least one billion euros. The CDA faction immediately called for a debate about the research, reports Dagblad van het Noorden.

‘I’m glad that the Lower House is taking the devaluation seriously and incorporating my published research, among others,’ De Kam says.

According to the professor, the calculated value of the 180,000 houses is actually quite low since the estimate is based on the number of houses sold. The real amount is higher. ‘The impact of houses that are not or cannot be sold has not been included in the calculation.’ 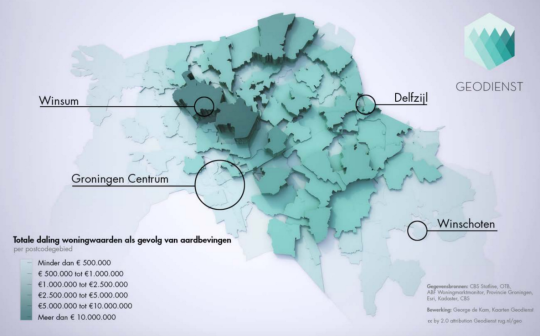 The gas extraction company NAM will compensate the residents of eight municipalities in northeast Groningen who were forced to sell their houses at a loss due to the earthquakes from gas extraction.

But De Kam’s research also reveals that considerable devaluation occurs outside that zone. In Groningen, 111 million euros of devaluation has occurred, and in Hoogezand-Sappemeer, properties have lost 90 million euros in value.

Moreover, according to the research, NAM does not pay out very much and the period in which they are offering compensation is too limited.

Hold your breath for science