Major changes are coming to the Groningen Central Station. At least 275 million euros will be spent on upgrades to the station by 2021. What do RUG professors think of the plans?
By Traci White

The biggest change is the addition of a pedestrian tunnel and a bike tunnel underneath the tracks. Both aim to make access easier for travellers – moving from one platform to the next isn’t very efficient at the station as it currently stands. Staircases leading up to the platforms from below will be added, similar to the design of the Rotterdam Central station.

According to traffic psychology professor Karel Brookhuis, who is a member of the advisory committee for traffic and transportation for the municipality of Groningen, the tunnels are definitely an improvement. ‘I’m in favor of tunnels. They also have the benefit of being invisible, which is a big advantage’, he says. 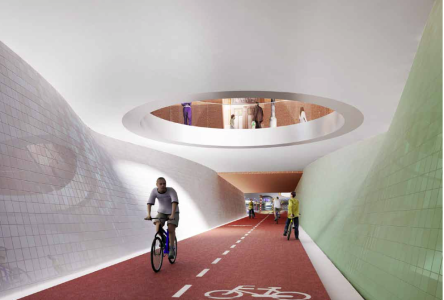 Breaking through the barrier

Via the underground passageways, the south side of the station will be connected to the ‘Stationsplein’ – the area for cars to drop off and pick up travellers – on the north side. ‘If the south side is arranged to spread out, then the bike tunnel will likely become the main road for cyclists’, Brookhuis says.

Professor Kees ven der Ploeg from the History of Architecture and Town Planning department expects the tunnels to have a positive effect. ‘The tunnels will go through the middle of the station, which is a huge gain. The barrier effect that has long existed will be broken through.’ 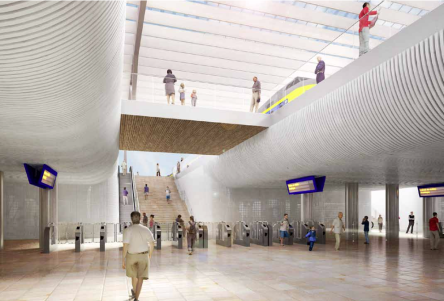 Underground pedestrian tunnels are one of the biggest changes proposed for the station.

The historic station building, which opened in 1866, appears to remain largely intact. The art nouveau décor inside the station hall is an iconic installation which has long set the station apart as one of the most beautiful in the Netherlands. The plans indicate that the dark green awnings over the existing platforms will also be preserved.

Van Der Ploeg is relieved that the station building itself won’t be changing very much. The possibility of adding shops inside is mentioned in the plans, but Van Der Ploeg is not sure it that is a good idea.

‘The station hall functions more as a waiting room, but with these changes, it would make the hall much busier. The way that the space is used now may not be very handy, but it is a beautiful room.’

There is little mention of the so-called Stadsbalkon, the bike parking garage in front of the station with a sweeping beige roof, in the plans. Added in 2007, the space includes racks for more than 4,000 bikes, but many consider it a failed project. It’s not big enough to provide adequate storage, and the outer wings of the structure partially block the view of the station.

‘It’s a visual obstruction of the beautiful building,’ Brookhuis says. ‘But in the interest of providing as much bike parking as possible, there is a big argument to keep it.’

If the Stasbalkon stays, the capacity for bike parking will be doubled: a new underground storage facility for 5,000 bikes will be added on the south side of the station. An additional 2,200 parking spaces should be added behind the Hunzehuys – the UWV building. The number of bike spaces in the area around the station is projected to increase to 15,000 by 2020, but including the new facilities, a bit less than 12,000 will be available.

Platforms one, two and three will also be filled in to create more space for travellers to hang out before catching their train. Van Der Ploeg says that sounds nice, but it could pose a logistical problem: ‘the platforms with trains will now be further from the station building, and that may increase the stress for travellers who have to walk further to catch their train.’ 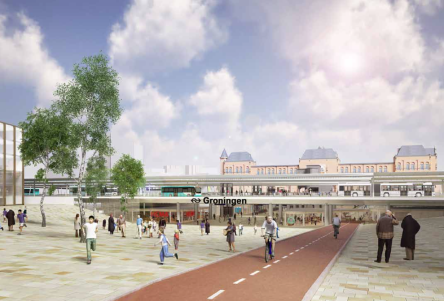 An artistic rendering of how the south side of the station may look following massive construction.

The artistic renderings of the plans also suggest that the Stationsplein will be brought closer by using the space created by the filled-in platforms. But that may also be problematic – how vehicles will actually reach the area is not very clear in the plans.

The fate of the bridges near the station – the Here bridge and the Emma bridge – are not very clear, either. Currently, most cyclists use the Museum bridge and head up the Ubbo Emmiusstraat toward the city centre, but both are too small to handle the heavy volume of traffic now, much less the projected future growth. Still, the plans to improve the flow of bike traffic by channeling it underneath the station should make a significant difference.

‘For the past twenty years, the station has been changed here and there, just a little bit at a time,’ Van Der Ploeg says. ‘It’s good that the whole station will be addressed fundamentally now.’

Click here for the PDF of the ambition document for the upgrades to the Groningen Central station.