SOG and Lijst Calimero have both released their candidate lists for the 2016 - 2017 academic year, and in keeping with recent years, students with diverse backgrounds are yet again in prominent positions.
By Traci White

Since 2012, SOG has had at least one international faction member in the University Council. Last year, the faction placed two candidates on its list, including Jonah Thompson, a member of the current council faction.

Evan Clark, the candidate for chairperson for the faction, is half Dutch and half American, and grew up in the southern state of Georgia. Asmo Esser, a Finnish student, is at position 3; Shannon Ayre, a half Dutch, half Irish student who grew up in Groningen, is the 8th candidate; and Alaa Hussaini from Syria rounds out SOG’s list as their 9th place candidate. 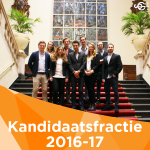 ‘The SOG faction always consists of people who are accepting of internationals and incorporate their opinions seriously’, says Thomspon, explaining the increasing presence of candidates with diverse backgrounds. ‘We are very happy to have everyone on board and are pleased that we can continue to be so diverse.’

Lijst Calimero’s list was published on Friday afternoon. Nathalie Niehof, the current chairperson for the faction, says that its three international candidates – Hanna Berretz in 4th and Yannek Adams in 6th, both of whom are German, and Dana Entcheva from Bulgaria in 9th place – were chosen at least in part for their international perspective.

‘Our list is always based on the applicants, and in recent years, we have looked out for internationals in particular because we also think it’s important that they are represented. But the quality of the candidates and how they fit into the group are the most important qualifications’, Niehof says.

The candidate list is also a mix of students with a variety of extracurricular backgrounds so as to better represent the wider student population, according to Niehof. ’We like to have some candidates who have board experience in different sectors, as well as people who can approach it all with a new, objective point of view.’

Lijst Calimero has six members in its University Council faction and SOG currently has five, and each party has one non-Dutch member this year – Boris Kyuchoukov from Bulgaria is the international representative for Calimero. Lijst Sterk, which has one member in the University Council, is accepting candidates through Monday, 13 March. However, information for would-be applicants is only available in Dutch on the faction’s Facebook page and website.

Update: Teunis Dokter of Lijst Sterk has confirmed that the faction will have one international candidate: Jacky Wang, from China, who will be in fourth place in the list. Wang was also in the candidate list last year.

Virtually no one is voting