During a Leeuwarden municipal council meeting, dean Jouke de Vries gave more information about the status of the plans for the RUG’s Leeuwarden branch.
By Traci White

Municipal councilperson Siep van der Meer presided over the informational meeting which was held at City Hall in Leeuwarden on Monday. The municipality will eventually be responsible for providing facilities for the faculty, including student housing, libraries and classrooms.

Although CDA representative Thea Koster emphasised that there is still no concrete proposal on the table, she and De Vries, who has been dean of the planned eleventh faculty since May, answered questions from the council members. The issues raised ranged from whether or not the faculty will help Leeuwarden to become more of a student city to marketing to what the impact of the plans would be on existing partnerships with UCF.

While De Vries hinted that there were several candidates for the eventual location of the University College, he said that representation in the heart of the city was vital. ‘I think it’s necessary to have a presence in the centre because the students will have an enormous impact on the atmosphere.’

Representative Koster reiterated that, stating that providing for more student activities is a priority in the negotiations with the RUG. She was also adamant that the collaborations with partner universities in Wageningen and Twente could continue. ‘That is one of our demands. Another requirement is that linking classes can be set up with the applied sciences schools like Van Hall Larenstein and NHL for those students to flow into higher education.’ 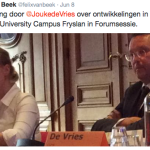 A tweet from clerk Felix van Beek about the council meeting discussion. ‘Explanation by @JoukedeVries about developments around the University Campus Fryslan during the forum session.’

During the forum, De Vries said that a budget of 50 million euros would be needed over the next decade to set up the eleventh faculty, which will consist of a platform for PhD candidates, ten master programmes and a second University College.

RUG spokesperson Gernant Deekens says that arrangement is in keeping with previous statements about financing made by RUG president Sibrand Poppema. ‘In making the request for the 25 million, the RUG accepts the risk if those calculations do not work out.’ 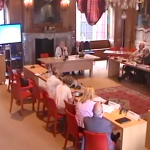 Previously, an estimate of 50 million euros was made for a regional fund to cover the costs of the master’s programmes that UCF eventually plans to offer alone. Currently, three are up and running, and De Vries suggested that three more are actively being developed.

Following provincial elections in March, the new coalition government in Friesland called for further research into the necessity of an eleventh faculty from the RUG in Leeuwarden in their agreement. Within the new provincial coalition government, CDA representative Sander de Rouwe is responsible for issues pertaining to knowledge and education, including UCF.

De Vries says, ‘The representative who is now responsible for UCF has said that they want to look very carefully at these plans and to test the models that underlie them. Then, negotiations can begin about the faculty.’ De Vries has previously expressed his concern that this assessment would delay the plans.

Koster said that a more concrete proposal for the eleventh faculty plans will be completed soon after returning from the summer recess. De Vries repeatedly implored the council to help him make these plans a reality: ‘I hope you will help me because I can’t do it alone.’