A new apartment complex for bursary PhD candidates has been added to SSH’s offerings for international students in Groningen.
By Traci White

The complex consists of 36 private studio apartments with a single bed, bathroom, shower, washing machine, heated flooring and a kitchen.

Each private room is 30 meters squared and also has a spacious outdoor patio or balcony. On the upper floors, the balconies are accented with neon orange and green covers that make the grey building complex a little easier to find: although the address is on Hoendiep, the complex is actually behind the front row of brick houses on the street.

According to SSH housing officer Lisette Lesman, each room costs 786 euros. However, since the RUG provides 400 euros per month for the bursaries, they only pay 386 euros in the end. Despite the current debate within Dutch universities about the bursary experiment, Lesman says there is already a long list of bursary candidates awaiting housing in Groningen.

The Hoendiep property, owned by De Huismeesters and built by Friso construction, became available on 1 June. Of the 36 furnished rooms, 13 are already inhabited. Lesman says that while some residents moved into the rooms from abroad, several bursary candidates, who had been living in other SSH facilities such as Diaconnesen House and Kornoeljestraat due to the lack of available rooms for PhDs, are also among the current residents. Several also moved from Kraanvogelstraat, which has shared facilities. 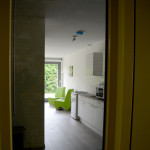 The view through the front window of a room with a green colour scheme at the Hoendiep housing complex. 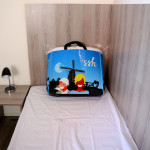 Each room comes with bedding provided by SSH in a decorative bag, 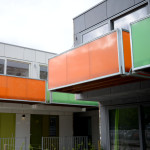 Neon orange and green balcony coverings on the second floor make the building easier to spot from the main street. 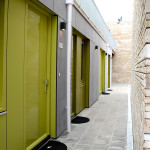 The front doors of several units at Hoendiep. 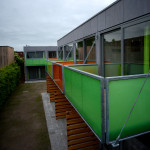 Neon orange and green balcony coverings on the second floor make the building easier to spot from the main street.

SSH sees the new addition as ‘a good step towards improving the housing offerings for international students.’ The group took over the Housing Office from De Huismeesters in January, with whom they also collaborate as one of several housing corporations accommodating internationals. Nijestee and Lefier also provide housing via SSH for exchange and degree students, including bursaries.

The Hoendiep complex is the first new facility that SSH has added since taking over. The group plans to evaluate the existing housing for international students, which means some properties – like Diaconessen House – will close and other new buildings – like the under construction De Trefkoel – will be added.