One giant leap (backward) for mankind

A poster for a 'CEOs and Office Hos' party from the legal department's student organization has been haunting Nina. Unfortunately, it's not the ghost of gender inequality that's following her: sexism is still alive and kicking.
By Nina Yakimova

I have learned that the notion of feminism represents different things to different people. I will not give a lesson on Feminism 101 or the history of the gender pay gap here, but I would rather discuss matters which (I think) are most urgent.

Let’s start from the university campus, a place fueled by free speech, knowledge, change, and growth. It’s certainly not a place where you would expect to find yourself surrounded by profanity and repulsive imagery of socially accepted discrimination. Let me cut to the chase: these images sometimes literally stare at you from the wall, disguised as posters for a theme party. 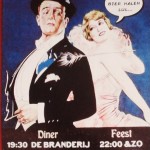 The poster, featuring old school sexism from the Jazz Age.

One such poster adorned the walls of Harmony Complex, advertising a theme party on the 14th of September, 2015, courtesy of the Juridische Faculteitsvereniging Groningen. The first time I saw the poster I didn’t think much of it, just the normal announcement about a party that I would (probably) not attend. Then, the reality laid itself bare – the theme of the party was ‘CEOs and Office Hos’.

Don’t get me wrong, I have nothing against parties, but not when they are the means of masking a bigger problem not only centralized in academia, but also deeply rooted in our society. The poster presents itself in the light of the Jazz Age of the ‘20s, marked by lavish celebrations of men where women are merely objects of entertainment.

I believe that we don’t perceive these types of images and titles as threatening or destructive and we tend to ignore them, but in fact, they diminish everything we (men and women) have worked for in the past decades.

There are myriad facts showing that in practice, discrimination absolutely affects women. According to the European Commission’s National Factsheet from 2013, ‘Women account for 21.7 percent of non-executive directors and 6.8 percent of executive directors in the largest publicly-listed companies in the Netherlands. The figure for executives is below the EU average whilst the non-executive figure is above average’. Compared to the ‘4.6 percent of CEO positions at S&P 500 (US) companies held by women’ cited in Catalyst, we are doing pretty well.

Yet in turn, this illustrates what is actually happening, or rather what is not happening: despite all the discussions, protests, and changes in laws, there is little to no gender balance in leadership positions in the Netherlands and around the world. I’ll throw some more numbers in here – there are 479 full professors at the University of Groningen with a male:female ratio of 385:94. Let that one sink in for a brief moment.

The aforementioned gaps in gender balance in leadership positions cannot be explained away by women working any less hard, being less well-educated or less inspired than their male counterparts. Instead, sexism, discrimination, and segregation are the true culprits.

The image of the woman on the poster is one we’re all too familiar with, that of sexual objectification. It leaves women trapped by the double standards that society forces on them and their sexualities. Besides, it serves as a reminder to women that they must fit within a certain mold set out for them or be punished, in this case by being called ‘hos’.

What does the word ‘Ho’ even mean? According to the online Acronym Finder, HO stands for couple of things: Head Office, Home Owners, and Handout. If only that was what the party was referring to.

Yet the definition in the Oxford English Dictionary Online hints at something far more vulgar than a home owner or a handout:

‘CEOs and Office Hos’ is a play on words whose refrain echoes in my head the whole afternoon like a bad yet catchy pop song. I keep thinking about how the word ‘ho’ impugns women’s values and morality in a very contemptuous way. And it’s suffocating.

But there is something even greater at play here: the poster transcends its entertainment purposes and enters the realm of the constant battles for gender equality. It emphasizes the urgency of the war, like the loud rumble before battle. And to let its title ‘CEOs and Office Hos’ continue to decorate the walls of the campus weeks after the party is over (I began writing this on the 30th of September) is a lost battle for feminism and gender equality and a win for the recurring gender discrimination.

I am left wondering (and admittedly somewhat relieved) how such images can make us aware of the progress toward eliminating the segregation and subordination of women and the gender pay gap. You may be with me or against me, but either way, I believe it is imperative to make sure the conversation continues, because despite all the progress we have made, it is clear that there is still much to do.