Dean Jouke de Vries of the planned eleventh faculty of the RUG and dean Barbara Oomen of University College Roosevelt in Middelburg tag teamed to give the Gemma Frisius ‘lecture’ in English for the opening of the academic year of UCF.
By Traci White

De Vries proposed that the lecture, held in the lavish Orange Room at City Hall in Leeuwarden, would be an interactive event to brainstorm about what the first years of the planned university college would look like.

But despite the premise, little new information was shared about the plans and the event quickly turned into a heartfelt sales pitch of university college education mixed with a question and answer session about what the role of the ‘faculty’ – which De Vries says the eleventh faculty would be ‘only in the most narrow sense of the term’ – would be in Friesland. 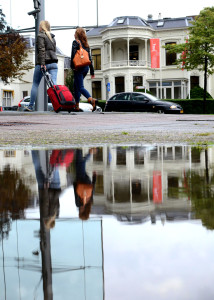 The current headquarters of UCF are reflected in a puddle after a rainy day in Leeuwarden.

Yet Marieke Vellinga, a state member of the opposition party D66, wasn’t completely sold. Vellinga says she still feels that not enough details have been finalised. ‘Before we can make a decision about this involving so much money, we need more info and clarity. Our task is to think carefully about it.’

The broadness of the plans makes sense given that negations among the municipality of Leeuwarden, the province of Friesland and the RUG are still ongoing. The final formal meeting among the involved parties is scheduled for Friday, according to De Vries.

The latest plan is that the municipality will provide infrastructure, the province of Friesland will dedicate 25 million euros and the RUG will accept the risk for that same amount for the eleventh faculty.

When asked by the audience about what would make this planned university college unique, De Vries said that starting with a broader educational basis and then offering specialisation would set it apart. But that is more or less the definition of a liberal arts education and is hardly an unusual approach in the Netherlands anymore, considering the number of existing university colleges nationwide.

Be that as it may, De Vries said the more focused approach should be oriented toward the so-called ‘hotspots’ of economic and cultural themes for research in Friesland: water, energy, tourism, gaming, dairy, liveability, law, governance & security, life sciences, and multilingualism.

These specialisations can be in part taught by and provided through knowledge institutions and local businesses, such as Wetsus, Dairy Campus, NHL and Stenden applied sciences universities, according to De Vries. 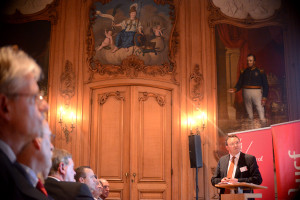 Dean Jouke de Vries explains his broad aspirations for the university college to the crowd at City Hall.

And that is what could actually set this planned university college apart: those plans for collaborating more closely with the existing applied sciences universities. Oomen said that Roosevelt has not really collaborated with other knowledge institutions in the Zeeland region thus far.

One among many questions from the crowd was about changing the name of the planned college – University of Groningen/Campus Fryslan – into something more attractive and memorable, like Roosevelt. De Vries praised the name choice of Roosevelt as well, a name that makes one think of two American presidents and Eleanor Roosevelt, and their contributions to American society. Oomen joked: ‘that name is taken’.

Very few potential or current students were in attendance, but much of the audience of roughly 100 people had connections to the RUG, UCF, local politics or the applied sciences schools and knowledge institutions in the city. A handful of audience members travelled along with Oomen from Zeeland to attend the event and seemed committed to convincing the rest of the crowd how much they benefitted from their university college education.

‘The devil is in the details’

The sentiment among all involved parties seems to be that the plans will become a reality. After the lecture, CDA member and municipal alderperson Thea Koster said the discussions between the RUG, the province and the municipality about setting up the faculty are coming along. ‘I think we all see the importance of this and we want to see it happen’, Koster says.

Piet Bouma, UCF’s project coordinator, says that the outcome of the ongoing talks is likely to be announced in the first week of October. ‘The province is very much willing to help us, and the municipality as well. So we’re confident about the process. But the devil is in the details, of course.’ 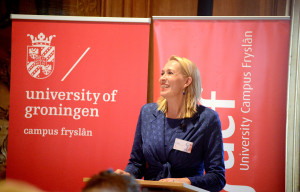 Dean Barbara Oomen of University College Roosevelt in Middelburg often called upon students and staff from her institution to talk about their experiences.

That ample support – and ample funding, and willingness to spend it – will be necessary to make the university college a success, according to Oomen. In other words, you need ‘cash, community and connections’.

‘You have to be prepared to invest in something excellent: a great building, top teachers and scholarships for top students’, Oomen says. ‘Don’t ever compromise on quality. We never did, and we are now reaping the benefits.’

After the event concluded, D66 member Vellinga wondered if the contribution of the applied sciences universities to the curriculum would be a strength or a weakness: ‘It could end up being too large, and Oomen also emphasised the importance of having a campus that isn’t too large where everyone really knows each other. So, if NHL and Stenden also get involved, then it could become megalomaniacal, and that’s not what we want.’