Almost a week after Queensday celebrations, the international student house Winschoterdiep is still in chaos. The festivities caused for hundreds, and certainly over a thousand euros worth of damage.
By Dan O'Neill

Stones are scattered on the floors close to the upstairs kitchens, broken chairs are strewn along the corridors and blinds have been torn down from the windows. There’s smashed glass, a broken ping-pong table, carpets stained with red, white and blue face paint, and doors covered in obscene drawings. Also, bins have been knocked over, floors are sticky after being drenched with alcohol, tables are covered in rotting food and the walls are full of holes.

Exactly who is responsible is still unclear. According to student manager Johanna Igges, a group Dutch students were caught on camera causing the damage. But it is unclear where they came from and whether they were guests of someone living in Winschoterdiep. 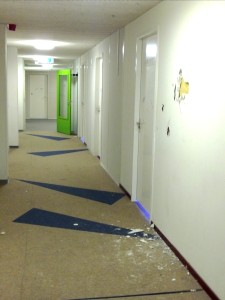 However, co-ordinator Jeroen Boonstra of the Housing Office says the nationality of those responsible is irrelevant: ‘This kind of behaviour is totally inappropriate. As there was no direct threat to anyone, it was not necessary to call the police immediately. However the Housing Office later called the police to lodge an official report of the damage.’

At the moment it looks like the students living in Winschoterdiep will have to pay for the damage, and they’re extremely annoyed. ‘I’m not paying for something someone else has done – that is ridiculous!’ Guillaume Parvau told a meeting of students from the worst-affected kitchen.

Law student Austen Smith agrees. ‘The plan to make everyone pay is not fair, as the Housing Office has no justification or evidence against anyone.’

There’s a lot of outrage among the students. Austen adds: ‘It’s surprising how quickly the Housing Office act when they want us to pay for some damage, yet they won’t spend money on new ovens and washing machines despite repeated complaints.’

Obey, or be expelled