The municipality wants the cycling route to Zernike to be made safer. But residents are resistant to the plans because they involve cutting down a number of trees. The plans have now been postponed for at least six months.
By Peter Keizer / Translation by Traci White

In Selwerd, Paddepoel and the Tuinwijk, more than 2,000 signatures from people opposed to felling the trees have been collected. Official objections were also submitted and the Party for the Animals (Partij voor de Dieren) and the Socialist Party (SP) posed questions in the council. Residents are angry that 70 trees are supposed to be  chopped down in order to make room for new cycling paths.

In recent years, the municipality attempted to persuade students to take the so-called ‘Smart Routes’ to the campus. But many cyclists say that the recommended routes are dangerous. Now, the municipality wants to do something to address that, including adding more cycling paths in Park Selwerd and broadening existing paths. 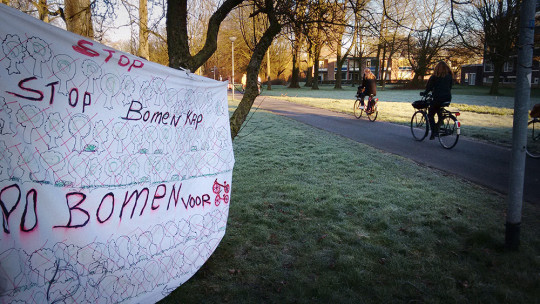 The existing cycling path and pedestrian path are meant to be swapped in order to create more space. But that means that trees along the path must be cut down. ‘As a result of these plans, an entire breeding ground will be destroyed’, says Harm Bakker, a resident who began a petition online against the plans.

Because there is so much resistance, the municipality decided to postpone the construction plans for at least six months. ‘The council wants to use that time to speak with the residents in the affected area. As far as we are concerned, objections from the surrounding neighbourhoods do not detract from the necessity of making these changes. We want to work together with those impacted about how we can best adapt the cycling paths in the area’, the mayor and aldermen said in a statement.

The municipality is in a bit of a hurry with the plans, however. The city wants to win the Cyclists Union (Fietsersbond) election and become Cycling City 2016 (Fieststad 2016). On Wednesday afternoon, the Maintenance and Traffic committee will meet with the municipal council about the matter.