ReThink meets the Board

The Board of the University joined the staff movement ReThink RUG in conversation about democracy and the work environment at universities. The group’s goal for the evening was to move from discussion to action.
By Tinka Floor

Assistant professor Kristin McGee moderated the second ReThink meeting, which was held on Tuesday evening in the packed Marie Lokezaal. President of the Board Sibrand Poppema acknowledged that ever since Amsterdam students launched the national university debate and staff there started up ReThink UvA, the Dutch university landscape has begun to change.

‘What’s happening is helping’, he said. ‘For example, on the issue of accreditation, the Minister of Higher Education is moving. I have to agree that it is thanks to the fact that the staff has finally started to complain about this.’ 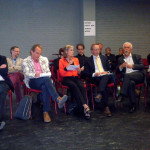 University staff and member of the Board of Directors got together to discuss the concerns of the ReThink RUG movement.

In an effort to move from conversation to action, ReThink has formed three committees to create action plans for broad issues: decreasing bureaucracy, assessing the amount of time invested in educational tasks and how that is rewarded across faculties, and better representing support staff. ReThink may also develop a so-called ‘bureaucracy test’ to measure the workload of individual tasks on staff members.

When it came to the matter of university democracy, Poppema was clear. Although the opinions of the University Council and other involved parties are taken into consideration when making an appointment, ‘We are not going to do elections. I am adamantly against elections, because I have seen them in the past. The person who promises the most is likely to be elected and delivers the least.’

To that, Willem Jongman responded that he does not think any kind of top-down model really works. Philosophy instructor Pieter Boele van Hensbroek seconded that: ‘I have been working at the university for approximately 25 years, and I have never been asked to suggest a name for a dean. From a staff point of view, this is decided high up and behind closed doors.’

He conceded that that could spell bad news for staff in those positions, but ‘if we do appoint temporary teachers, we want to provide them with an experience of value; they should come out of a two year contract with additional skills, like a university teaching qualification which will help them in their new job.’

At the end of the evening, several ReThink members stated that they were pleased that the Board was open to discussion and had cleared their busy schedules for an evening. But now, it’s a matter of waiting to see what will happen next.

Board agrees with ReThink