The initial costs for the RUG/Campus Fryslân plans will be 57.1 million euros. The RUG’s contribution is expected to amount to 29.94 million and the campus is meant to remain in operation for a minimum of 15 years.
By Traci White

The costs are budgeted for the first five to six years – an initial stage of development – and are based upon growth over that period to include 50 staffers, 1,000 students and 50 PhD candidates.

RUG president Sibrand Poppema, CDA representative for the provincial executive of Friesland Sander de Rouwe, CDA alderperson for the municipality of Leeuwarden Thea Koster, and RUG/Campus Fryslân dean Jouke de Vries spoke with the media about the plans during a press conference at City Hall in Leeuwarden.

The total investment for the development of Campus Fryslân up to the ‘steady state’ phase – when the campus is breaking even – will be 57.1 million euros, according to the development report. Of that, 31.13 million will be spent on the development of a University College; 8.76 million on developing the master’s programmes; and 17.21 million for the PhD positions.

The development report states that 21.6 million euros will come from the province of Friesland and the municipality of Leeuwarden together, and .33 million will come from ‘to-be-determined project financing’. The RUG will finance 29.94 million euros, and 5.67 million from the second and third income streams.

RUG president Sibrand Poppema stated that the university would not be making its contribution in cash, but rather that the RUG’s part would come in the form of the activities conducted at the Leeuwarden campus.

RUG/Campus Fryslân managing director, Piet Bouma, who was also present at the press conference, says, ‘After five or six years, the tuition fees will come back to us from the students, diploma financing and the bonuses for PhDs will come from the ministry, and then we can account for a large portion of that 29 million.’

Still, the exact details of the RUG’s financial role remain somewhat vague. In a follow up report from Gerrit de Jong published on 7 October which was available at the press conference, De Jong wrote, ‘The assumption is that personnel costs, material costs and housing expenses will be fully covered, but that is not definitely known.’ De Jong had been asked by the province to conduct an independent analysis of the RUG/Campus Fryslân plans this summer.

The objective is to eventually launch ten masters – consisting of a mix of niche and broader research subjects with 40 students a piece – and a University College, a broad bachelor programme with a maximum of 600 students taught on a residential campus with a focus on the so-called Frisian research hotspots. The University College is scheduled to begin with a cohort of 100 students in the 2017/2018 academic year. 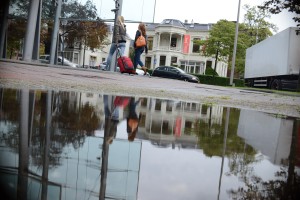 The location of housing for the University College has been narrowed down to three options with a definitive choice expected later this year. A document from the municipality of Leeuwarden titled ‘From University Campus Fryslân to RUG/Campus Fryslân’ says that municipality and the province assume that the purchase of a location for the residential college is a given, and that the RUG is expected to pay for this from its own resources.

The assertion throughout the past year had been that the municipality of Leeuwarden would be providing the infrastructure of the campus. CDA alderwoman Thea Koster says that the decision was made to join forces with the province rather than to negotiate with the RUG separately about housing.

The role of the applied sciences schools in the region was also made clearer. The embedding of a transition into the existing HBO schools would do away with the ‘inefficient and costly’ transition year after a student completes their bachelor degree at an applied sciences university, according to Poppema.

During this ‘pre-master’ phase, Poppema described university professors giving lessons at the applied sciences schools during the bachelor phase so the students can get accustomed to research university-style education. Applied sciences university instructors should also be able to give classes at the master’s level.

President Poppema also emphasised that adding to the master’s offerings of the RUG was crucial for retaining students who get their bachelor in the north, as opposed to the current trend of most graduates heading to the Randstad after getting their degree. It is also vital for the RUG to further develop its reputation as a research institution, according to the university president.

The plans still require approval from the Provincial States, the municipal council of Leeuwarden and the university council of the RUG.

EDIT: Piet Bouma clarifies that student housing is not included in the budget ‘and has never been. As is the case for UCG, the university will not pay for student housing; these costs are to be covered by themselves.’ However, the RUG/Campus Fryslân budget does include the housings costs for the ‘faculty building(s) that will be used for teaching, research and administration.’