The Science Faction in the University Council is against the reorganisation and outsourcing of the restaurants and canteens at the RUG.
By Peter Keizer / Translation by Mina Solanki and Traci White

The university wants to put the coffee cafes, restaurants and take-away restaurants up for sale. The university feels that large canteens are no longer fashion anymore, and the institute wants to focus exclusively on the tasks of providing education and research. Costs can also be reduced by selling the restaurants.

However, the Science Faction objects. ‘I will be brief: we will vote against the outsourcing and reorganisation which goes with it. ‘As far as we can see, utility and necessity are completely absent’, says faction member Mathieu Paapst.

On Thursday, the factions in the University Council discussed the reorganisation. They are only allowed to advise on the issue, however. The outsourcing can no longer be stopped.

The factions have only discussed the outsourcing in confidence up to now. According to sources familiar with the matter, students and staff members have a lot of criticism about the plans and, as such, the plans have not been adequately worked out. 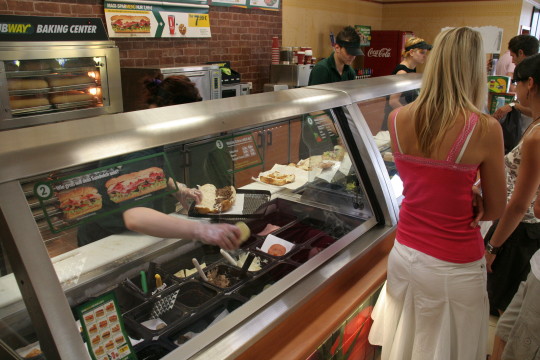 The university does not want large canteens anymore; instead, they want various small eateries. In the business plan, the fast food chain Subway is named as an example. The factions do not see it working out because the Subway sandwiches and salads are too expensive and unhealthy, various sources say.

Student faction SOG is not against the outsourcing, but they are critical of these plans. ‘ We understand that the Science Faction is against outsourcing, but it was only a few years ago that the RUG tried to sort out the canteens’ problems with the help of an external expert; that did not work. That is why we now see the advantages of outsourcing’, says faction president Alexander van ‘t Hof.

But the party is only in favour of outsourcing if lower prices for the students can be guaranteed. Van ‘t Hof: ‘We want a simpler, healthier and more sustainable offering. We also want students to be able to work there. We also see opportunities for student entrepreneurs if a food court is added.’

The 29 employees of the canteens and restaurants were informed just before the Christmas vacation that their services would be outsourced and reorganised. There should be no job losses because the new catering company is meant to take on the current employees and guarantee that they will be paid.

According to the RUG, due to ongoing internationalization, there is more demand for variety in food and drinks, as well as an interest in smaller businesses. However, the results of a customer satisfaction survey conducted in May 2015 revealed that students and staff were quite happy with the services, aside from pricing. The catering locations, meeting and lunch services, dinners and buffets all scored a 6.5 or 6.6, which was one-tenth of a point lower than the year prior to that.

The costs seem to be a more important reason for the reorganisation. In the last two years, the department made a loss of around 700,000 euros. In addition to this, the university wants to apply the concept of small eateries to the new buildings which are under construction in order to give the faculties a more international appeal.

According to the reorganisation plans, preparations for the outsourcing will cost 182,000 euros this year. Next year, the consultants, career coaching and project support will cost an additional 129,000 euros. The canteens will be renovated next year during the summer vacation so that the new caterers can start in September 2017.