The results of the University Council elections left Lijst Calimero in tears: SOG has retaken the throne.
By Peter Keizer / Photos by Sjef Weller / Translation by Traci White

Last year, it was SOG’s turn to cry when, after having the most seats in the University Council for years on end, they lost to Lijst Calimero for the second year in a row. But this year, the tables were turned: Calimero was all tears, and SOG was all cheers.

University vice president Jan de Jeu informed the raucous crowd in the Academy building on Wednesday that the party had won six seats, one more than Lijst Calimero. ‘It’s awesome’, outgoing faction president Alexander van t’ Hof says. ‘I’m just shaking from the adrenaline. We’re finally back on top. We have done a lot of soul searching over the past two years, and this just goes to show that hard work pays off.’

Daan van Dijk, the new president of the Lijst Calimero faction, reacts calmly to the results. ‘It’s a real shame, we worked very hard and led a good campaign. This is a let down.’

Van Dijk has no idea why his party lost one seat. ‘Perhaps it’s because of the low voter turnout. It’s difficult to identify a reason for that right now, we will be looking into it.’

The turnout was indeed ‘relatively poor’, according to De Jeu. ‘We are accustomed to a turnout of above 30 per cent. We have to work together as well as we can in order to ensure that we can achieve better turnout next year’, he told the crowd assembled in the room.

Lijst Sterk participated in the elections for the first time last year and won one seat. Faction president Reinard van Dalen received 98 votes, which was enough to make sure his party remained in the University Council.

The election results for the faculty councils also delivered a surprising outcome. Letteren Vooruit made an impressive start last year and won three seats in their first year, and this year, they were able to double that figure. 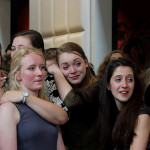 … and tears for Lijst Calimero. 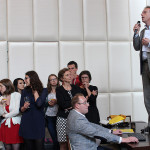 A full house during the presentation of the election results. 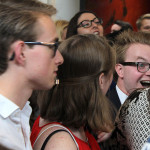 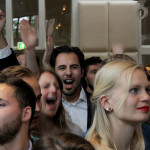 Virtually no one is voting