Because of newly strengthened national housing laws, SSH may have to wait to improve international accommodations in Groningen.
By Traci White

Although the housing law was initially changed over the summer, the full implications of the new rules for student housing only became clear in recent weeks.

The rules forbid investors from working with student housing providers any longer. Government officials feared that any financial support from the state for such projects could wind up in the pockets of private investors.

That includes international student housing projects, which Utrecht-based SSH is responsible for in Groningen. During the University Council committee meeting last Thursday, Jan Wolthuis, staff official for Students & Education at the RUG, explained that SSH is already facing delays due to the ongoing earthquakes in the region.

The housing law changes may further postpone their plans for renting better rooms to international students in the city. ‘SSH has a policy of improving the housing in Groningen, but that has been delayed because of the earthquakes and financial problems’, Wolthuis said. ‘The government has strict rules about financing.’

The potential financial changes pose a challenge in addition to the current hurdles for building earthquake-proof facilities. The second phase of construction of De Trefkoel, a property with 450 student rooms that SSH is connected to, was postponed in April to ensure that the project could withstand tremors caused by gas extraction in the province of Groningen. The project will not be completed until 2017, according to KENK architects. 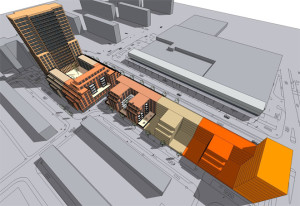 A design of De Trefkoel by Kenk Architects, located on the Zonnelaan near Zernike. 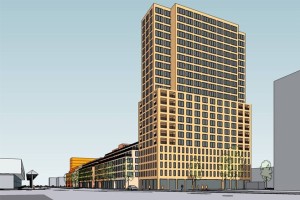 A design of De Trekoel building, which will include 450 new student rooms.

Part of SSH’s strategy to improve housing in the city includes removing certain properties, such as Diaconessenhouse, from their portfolio. But Wolthuis also said that there may not be a replacement available for the 198 rooms in the Diaconessenhouse when the building complex is shut down for demolition next summer.

‘We’ll have to see how it goes’

Jolien Stokroos, team manger for SSH in Groningen, says that construction at De Trefkoel should resume soon. ‘All new construction projects have to be made earthquake-proof, including to-be-built student housing.’ As for the new housing law, ‘we’ll have to see how it goes’, Stokroos says. ‘Discussions are ongoing between the housing corporations and the government.’

The new rules signal a fundamental shift in the way that student housing is offered in the Netherlands. Previously, it was common for investors to have their real estate projects managed by construction corporations, but the changes to the law have brought an end to the practice.

Despite concerns from the national student union LSVb and unions in Amsterdam, Zwolle and Leiden about the impact on the availability of rooms for Dutch students, housing minister Stef Blok does not believe that the new rules are too strict.

Christiaan Brinkhuis, treasurer and representative for housing at the Groningen Student Union (Groninger Studenten Bond), says that the local group co-signed a letter addressed to the House of Representatives last week about the matter.

‘Most students rent from the private market’
‘In the vast majority of student cities, corporations such as SSH have a large amount of the student housing in their possession, but in Groningen, that is very limited: here, they hold a mere 17 per cent, whereas in most other cities, that is closer to one-third of all housing’, Christiaan says. As such, ‘the consequences for students in Groningen are unlikely to be dramatic, since most students rent from the private market.’

Be that as it may, GSb would like to see the municipality enter formal agreements with SSH similar to the performance agreements that exist for other housing corporations in the city.

According to Algemeen Dagblad, groups such as SSH don’t have enough money on their own to finance new, affordable student housing in the coming years. Minister Blok suggests that corporations can make use of the Guarantee Fund for Public Sector Housing (Waarborgfonds Sociale Woningbouw) from now on to finance student residences.

Projects which have already been approved will not be impacted by the changes, nor will the thousands of units which are planned for demolition and renovation which SSH currently rents from other corporations.

SSH has opened two properties – Hoendiep and Frascati – since taking over for The Housing Office in January.