The Housing Office believes that finding international housing in Groningen will be easier once a new system comes in place. For now, internationals still struggle to find a room.
By Traci White

After the hectic first day of classes, Lena Gierse, 20, a psychology student from Germany, bikes home. But she’s not headed to Winscho, Selwerd, or the Moestraat – she’s heading deep into the Stadspark, where a caravan awaits her.

Back in August, she visited Groningen to view a couple of student rooms. Her parents jokingly suggested that she could take the family caravan if she couldn’t find anything else.

Gierse had wanted to avoid that. While in town last month, she decided to check out the Housing Office, just in case they had anything left. She was told there might be a place for her on board a boat, the Princess Juliana. ‘But that one was so expensive, it was crazy!’, Gierse says. 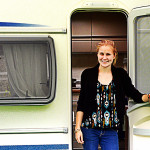 ‘The hotelboat was so expensive, it was crazy!’, says German student Lena Gierse.

How expensive? 752 euros, which is almost twice as expensive as the 2013 average Dutch student room in Groningen – 396 euros – according to Kamernet. It’s all-inclusive, including meals, but it’s still more than most students can afford. Comparatively, Gierse is paying 200 euros for two weeks in the Stadspark.

While the Housing Office added 100 new rooms this year, including the boat, there’s still a shortage. They have 1,550 rooms, but the RUG and Hanzehogeschool combined have more than 2,000 international students arriving this semester, and they all need a place to live.

Strangely enough for Dutch students, there is no problem with housing this year. Jeroen Boonstra, coordinator of the Housing Office, recommends the same sources that Dutch students use to the internationals if the Housing Office doesn’t have anything available. ‘We send the students a list with most of the private mediators in Groningen, as well as the addresses of student housing association Lefier and various Internet links.’

However, Gierse isn’t the only one struggling. And even the students who have found a place on board the Princess Juliana can only stay until the end of January – after that, they can ‘bed hop’ to another student house. That’s a month after the official handover of the Housing Office from housing cooperative De Huismeesters to SSH on 1 January.

Once SSH takes over, a new system will come online: similar to booking a hotel room, students can select a specific room instead of just a building preference. After 1 January, the focus will shift to figuring out which of the 15 international student houses to keep and renovate, sell, or tear down and replace.

As for Gierse, her search has ended for now. She’ll be moving into a spacious, affordable room close to the center on 14 September. But she’s genuinely enjoying herself in the meantime. ‘It’s like being on vacation’, she says, relaxing inside the caravan, surrounded by tall trees, peace and quiet.