The new Student Portal was meant to be a ‘party’ for the students. But computing science student Emilio Oldenziel just found it annoying. He came up with a way around it.
By Peter Keizer / Translation by Traci White

One month ago, the RUG launched the new system that is meant to be the nerve centre for students: the place where Progress, Nestor, RUG information and rosters come together. But not all information in the Student Portal is equally interesting, Oldenziel feels.

‘I noticed straight away that there are two modules at the top that take up a lot of space: ‘Need to know’ and ‘Nice to know’. I took a look at them and saw things about presentations in the biology department, for example. But I study computing science, so that’s not very interesting to me. I would much rather just have a list of my grades or how much credit there is on my student card at the top. But it’s not an option to minimise it’, he says. 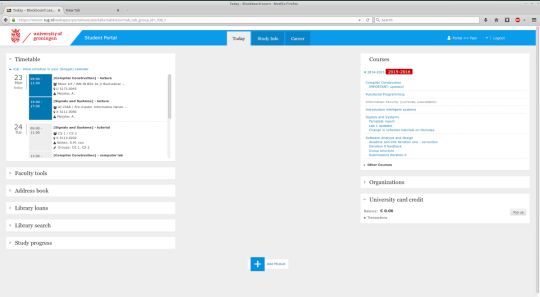 Oldenziel contacted Nestor support immediately to ask if there was a way to get rid of the modules. ‘In response, they said that it’s not possible and that I would just have to live with it.’ But he couldn’t accept that. Oldenziel realised that he could use AdBlock Plus, a programme that allows you to block advertisements in your browser.

‘To make my life easier, I made a filter that makes the modules invisible, and that makes everything much more attractive.’ It took some time to figure out how to configure AdBlock Plus, but eventually it turned out that I just needed to add two lines of code. ‘The modules disappear and the rest of the content moves upward.’

Oldenziel quickly shared his discovery in the WhatsApp group for his programme and, later on, with the commission of ‘Prominent in de Tent’, a gathering for ten study organisations. ‘Several of them said right away, ‘Wow, I really want that. I think it’s really obnoxious, too.’ They asked me to install it on their laptops.’

The workaround isn’t for everyone, Oldenziel says. ‘Some students think Portal is just fine. But I think that you really should have the option to delete pointless modules. By using this method, I’ve kind of played a trick on Nestor: if you guys don’t adjust it, then we’ll do it ourselves.’

IT employee Ype Poortinga, who was involved in the development of the Student Portal, doesn’t think it’s a good idea to block the modules. The ‘Nice to know’ column may not be vital, Poortinga says, ‘but there is information there that your own study shares with you. You can turn off notifications from other departments if you click on ‘settings’ further down the page.’

And the ‘Need to know’ isn’t there for nothing. ‘Information is posted in that section that you have to know. If you block it, you may miss important information about exams and assignments. And if you miss an exam because you blocked it, then you’re just out of luck because you should have known if you had seen the messages. According to the rules of the university, you’re also required to check the site. Ignoring the messages won’t be beneficial to your studies.’

Here’s how it works: