On Friday, Vice President of the European Commission Maros Sefcovic visited Groningen for a debate with students. He sought to answer their questions about the future of energy.
By Blanca Civit

Sefcovic is responsible for Energy Union, a project of the European Commission which aims to lead the transition to sustainable energy within European countries. Sefcovic proposes the free flow of energy across countries and the rights of sustainable, affordable and safe energy for all citizens, as well as changing the markets and regulations for greener energy production with the aim of slowing down climate change.

The Energy Debate, which was part of an ‘energy tour’ around Germany and the north of the Netherlands, was organised by Energy Academy Europe and attracted students from both the University of Groningen and the Hanzehogeschool. The audience posed questions to Sefcovic about the future plans of the energy market, policies, sustainability and the economy. 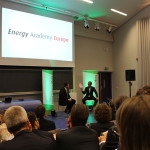 A crowd of students listens as Max Westerman speaks with Maros Sefcovic during the Energy Debate. Photo by Blanca Civit.

When asked to name the three main changes that need to happen in order to improve the European energy market, Sefcovic said: ‘Changing the mind set of the ministers to find a solution towards a transition; changing the design of the electricity market; and keeping carbon at the right price.’

The debate leader, journalist Max Westerman, subtly joked about the earthquakes which Groningen is suffering from, ‘Mr. Sefcovic, we are lucky that you visited us on a day that the floor is not moving.’

In that vein, one of the students asked Sefcovic his opinion about Shell’s activities in gas production in Europe. Sefcovic diplomatically replied that Shell’s work can occur ‘only if the Ministry accepts it and only with the highest standards in safety to make sure they don’t harm the environment and the citizens.’ 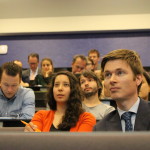 A crowd of students listens as Max Westerman speaks with Maros Sefcovic during the Energy Debate. Photo by Blanca Civit.

Katarina Sabolová, a psychology student participating in the debate, felt that Sefcovic’s visit helped those present to become more aware of the importance of the issues related to energy. ‘It is our responsibility to think what we can do better in order to change and impact the society regarding sustainability and energy.’