What's happening at the university? Afraid you missed anything? Here is your weekly update from 17 - 23 April.
By Traci White 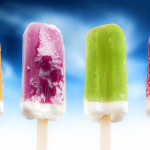 After being caught with popsicles and lemonade stolen from a student house on the Korreweg, a man was sentenced to a year in jail for breaking into multiple houses. One of the residents was home at the time and called the police after locking herself in her room.

A finger print belonging to the suspect was found at another home that was broken into, and the man was accused of burgling another student house on the Heymanslaan. He claimed that he entered the house on the Korreweg to warn the residents that their door was open. 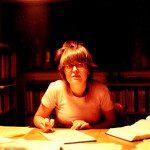 The number of RUG students who don’t do internships, study abroad or become board members of student groups has increased by 10 percent, according to a survey of about 900 recent RUG graduates.

University board of governors member Jan de Jeu isn’t too concerned. ‘We are certainly advocates of students doing things outside of their studies that contribute to their personal development, but we still believe that your studies should be the top priority. If you have time to fill with expanding into other areas, then you should, but it needs to be in the right order.’

Quiet zone in the UB 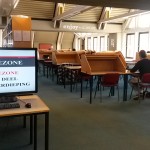 Students will have to get used to the new quiet zone on the fourth floor of the UB, where visitors really have to be absolutely quiet. Students are only allowed to use printed materials in the zone, so no laptops, phones or tablets are permitted.

UB spokesperson Minke Haveman says students have long expressed the desire for such a space, especially during exam periods. ‘Some people find it difficult to concentrate if they hear someone tapping away at a keyboard or whispering. They want to be in a cave, with no windows or distractions: just books and a desk.’ 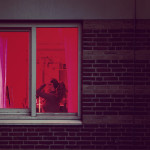 Many young scientists at the RUG feel exploited. They are expected to be workhorses, hopping from contract to grant to post doc, and they’re cheap labor.

‘If you work in research, you have very little certainty’, says post-doc Emi Saliasi (31). He also laments the ‘over specialization’ of the scientific world, making it nearly impossible for researchers to find work outside academia. Following a trail of fellowships leads many scientists far from home and family, and the temporary nature of the work also means no accruement of pension funds.

The winners of the UK Writing Competition are… 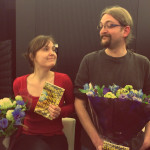 Lilian Zielstra and Paul Meis are the winners of the 2014 UK writing competition. Zielstra, a Dutch student and current house poet for the RUG, won the Dutch-language competition with her story The Summers of Thomas. Meis, an American Studies student, won the English competition with The Call of the Void.

The winners also received 500 Euros from the RUG’s representative fund. There were 53 entries from students and staff from the RUG and UMCG, and the ten best entries will be published in the book Oneindig – containing 6 Dutch and three English stories -, which is available for purchase through the UK for 7,50. Interested? Send us an email!