By the light of a nearly full moon, a three-headed chandelier and a smoldering bonfire, I sit listening to the wise words of an authentic Babushka (grandmother).
By Lisse van Vliet

As my French neighbour starts playing the guitar and an Italian fellow student joins the host in preparing an original Georgian dish, I find the time to jot down my experiences at a Russian summer residence, better known as a Dacha.

It all started with an extreme case of coincidence, since the chances are small that you come to sit next to one of the three familiar Muscovites in a city of 14 million by coincidence. Alexey and I know each other from my previous trip to Russia, when he hosted me at his apartment and we visited the Malaysian embassy to lay flowers for the MH17 tragedy. At the time, it was already very clear that he did not like how things were evolving in his country. ‘If someone would have sketched this scenario for me five years ago, even I would think of it as excessively pessimistic’, he states while we enjoy some local brewery after Banya (a Russian sauna). History repeats as the town where his family’s estate is located used to be a niche of political dissidents.

‘People here have no urge to change their situation’
As convicts were not allowed to be within a hundred kilometers of a city in Soviet times, Tarusa (120 km from Moscow) flourished with the inflow of many intellects and artists. Already before Stalin’s era, this town, built on the banks of the river Oka, hosted many well-known Russians, such as the poet Tsvetaeva and the landscape painter Polenov. It is, however, a gloomy picture that our Alexej paints of the current state of affairs in Russia. He states that the last hope for change evaporated in the 2011 elections for the Moscow mayor, which was lost by Navalny. ‘There was a great grassroots movement in support of this progressive liberal man, increasing his constituency up to 25 per cent of the voters’, but it was all in vain.

He tells me that it proved impossible to convince the inhabitants of Moscow of their relatively unfortunate situation and the need for more freedom to improve it. They seemed numb to the notion of freedom and branded him as a U.S.-sponsored provocateur. ‘They simply don’t care. When there is a demonstration in Moscow, there will be maybe 10,000 people; in Petersburg, 1,000; in Novosibirsk, 100, and that will be all.’ People here have no urge to change their situation. This is in contrast to his arrests, mainly for joining these sporadic protests – it’s considered a ‘crime’, which will nowadays receive a 1,000 euro fine.

A ‘crime’ which seemingly isn’t punished with any fine whatsoever is the maniacal overtaking done by expensive cars on the highway leading out of Moscow. Those roads are gravely underdeveloped for the amount of traffic. It made the journey to the dacha a long ride while we were further delayed due to a grumpy ticket lady unwilling to sell us bus tickets five minutes prior to departure. Every Friday evening, all Muscovites leave the city. Every Sunday evening, they return. ‘I have once spent seven hours in a traffic jam, can you imagine!’ complains the trilingual son of Alexey’s Dutch neighbour.

According to my host, the main problem of Russian society is a lack of love in their childhood. This results in a harsh climate in which the extremes are much further apart. His family, however, appears to be the odd ones out. A grandma who is as good a cook as she is modern and the unbelievable good weather of twenty-eight degrees made this visit memorable. Who said Russia has a cold climate? 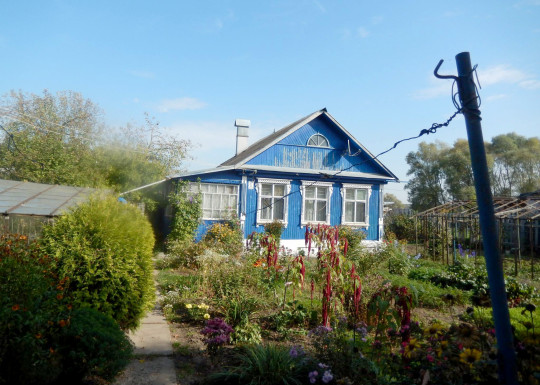